Thrives on its sleazeball hero being so colorful that you forget its thin, vacuous, amoral and improbable hit man story. It’s a shame the film is so meaningless because the casting decisions are perfect all around, from Pierce Brosnan’s brassy hit man role to co-star Greg Kinnear as the sad-eyed, soft-spoken, depressed nerdy businessman. Brosnan goes from playing the suave Bond to being a lowlife “corporate” assassin and looks good in both roles. It’s written and directed by Richard Shepard, who shoots for Quentin Tarantino-esque comedy and a happy-go-lucky morality probe but only succeeds in diluting both aims with a story that winds up not only unconvincing but ridiculous.

While on assignment in Mexico City scruffy hit man Julian Noble (Pierce Brosnan), a crude hulking ladies man wearing a gold-chain and sporting a mustache, strikes up a conversation at a bar with the grief-stricken Denver suburbanite businessman Danny Wright (Greg Kinnear). The two lonesome opposites begin an unlikely relationship after much bickering that will eventually have their two worlds interconnect. Danny is down because he was laid off a few years ago and his new business venture hasn’t produced any results yet. He also grieves with his wife of fourteen years Bean (Hope Davis) over the loss of their young son three years ago in a traffic fatality. Danny is here to pitch his company to a Mexico City firm for a contract, but is running second best to a competitor. Julian has been assigned a few tasks by his handler Mr. Randy (Philip Baker Hall), and has finished one job early and spends his idle time getting smashed on margaritas. He has the blues because he has no one to help him celebrate his birthday. Julian has been a hit man for the last 22 years and lives well, but has no friends, relations or regular address. It takes a bit of coaxing, but Julian persuades Danny to attend a bull fight with him and confesses what he does for a living. The bull fight scene leads to a pseudo philosophical comparison between the matador, who kills for sport and whose job is to bring death to the bull with honor, and the hit man who does it solely for the money. This explanation is taken to be as serious as an erection problem and offers the most unintended humor in the film.

The story picks up six months later with Julian, while in Vienna, informed by his handler that he botched two jobs because of his psychosomatic ailment that causes him to get cold feet, and now the big boss Mr. Stick has ordered his execution. At his lowest ebb Julian goes to Denver during Christmastime to see Danny, his only friend in the world, to ask his help in doing one last job for his bosses to settle things up. It seems Danny’s luck has changed and we are left wondering if the hit man helped secure Danny a contract in Mexico City and he now owes Julian a favor.

The only thing that remains memorable about The Matador is Brosnan’s satisfyingly raunchy self-deprecating performance as a creepy evil sociopath who can make you laugh (he paints his toenails on a whim and walks through the lobby of a fancy hotel in a Speedo and cowboy boots) at the same time he gives you the shivers (showing Danny how he operates as a hit man, by going through the motions of killing a fan during the bull fight). The movie took a wrong turn when it tried to pull Danny into the hit man’s business, which seemed contrived, unlikely and phony. It continued on the wrong foot by trying to build up Julian into being a lovable character when he can’t kill anymore after building him up as a repulsive cold-blooded killer for most of the film. You can’t have it both ways: that’s just not a cocktail that shakes right. 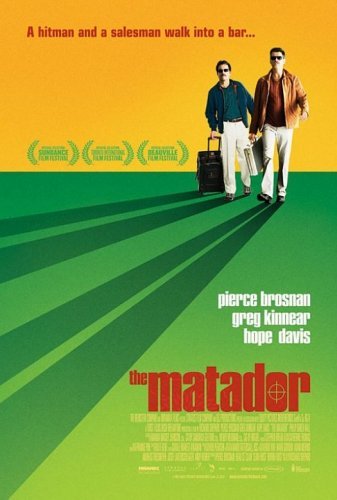