MASTER AND COMMANDER: FAR SIDE OF THE WORLD

Australian three-time Academy Award directing nominee Peter Weir (“Gallipoli”/”Dead Poets Society”) adapts with co-writer John Collee the popular adventure novel by Patrick O’Brian to the big screen. Master and Commander was the first of O’Brian’s 20-book series which was set during the Napoleonic Wars and focused on the friendship of two seafaring men, the patriotic sea-dog warrior espousing his strong sense of leadership and respect for doing one’s military duty without hesitation, British Royal Navy Captain Jack Aubrey (Russell Crowe), and his questioning shipmate physician best friend and intellectual sparring partner, the naturalist Dr. Stephen Maturin (Paul Bettany). The film is set in 1805 as it changes the time period from O’Brian’s first novel’s War of 1812 (this way it won’t take a chance in antagonizing an American audience) and infuses into the story the plot of The Far Side of the World, the 10th book in the series. It’s a rousing though conventional and predictable sea-faring escapade of the old-fashioned kind, where there’s even some sing-along sea shanties in the offering to numb the pain from all the tedium and loud thunder from the cannonball fire. It’s much different in scope from this year’s other blockbuster story on the high seas — Disney’s theme park comedy pirate film — Pirates of the Caribbean.

It highlights an all-male cast. They are aboard the British ship carrying 197 souls and twenty-eight guns. The seamen have no time to think about women as they work hard swabbing the deck, while the gung-ho officers are too busy drinking rum to even remember what a woman looks like.

The dull but efficient and unfazed Captain “Lucky” Jack Aubrey is in charge of the H.M.S. Surprise, a war ship sailing off the coast of Brazil with orders to intercept the rogue French vessel Acheron. The admiral’s orders read: “You will sink, burn or take her as a prize.” But in the dense fog the larger and superior Acheron catches the Surprise offguard and gets the upper hand, inflicting many casualties and rendering the British ship not fit for war duty. The ship’s sensitive surgeon, Dr. Stephen Maturin, performs an arm amputation on a brave Midshipman Blakeney (Pirkis). In addition to the lad’s serious injury (many of the seamen were merely children as young as 10), an old sea-dog, a carpenter’s mate (Bryan Dick), has his brains sewn back into his skull while he remains stoically absorbing all the pain. Instead of going home, Aubrey gets the vessel out of harm’s way and seeks to repair it at the Galapagos Islands. This pit stop allows Maturin to act like Charles Darwin (who came at a much later period to the islands) as he goes ashore hunting down cormorants and iguanas and the like, but before departing this primitive unexplored paradise there are some heavy-handed debating points exchanged between the buddy opposites about the importance of war superseding even the pursuit of knowledge. When not debating the nature of war, the cello playing physician and his viola playing commander, sit out a storm by playing a mean Mozart duet and seem to be in harmony as long as the establishment’s trusted warrior is in command.

The second encounter with the French frigate also fails, as it’s viewed by the British crew with superstition as an elusive “phantom ship.” The Surprise was led into a trap by its clever enemy when sailing around Cape Horn. During the next pit stop the surgeon shows the captain an insect that makes itself look like a stick, and from hereon you can safely bet your favorite pirate Halloween costume that battle number three between the two sailing foes will have Lucky Jack use that as part of the trick strategy for the inevitable next confrontation.

To inspire his sailors for battle with his superior foe and show his mettle for leadership, Lucky Jack rhetorically asks them: “Do you want your children to grow up singing the ‘Marseillaise’?”

The film remains distant, hard to get emotionally worked up about its superficial theorizing of war and empire, hardly reaching any depth in exposing the personalities of its cardboard characters. But as a spectacular sea adventure it unfolds where heroics in battle and good leadership are made into the ultimate virtues of mankind. Both the advocates for peace and war are characterized as fair-minded and honest men, and are viewed as kindred souls–separated by at least two oceans from the corrupt politicians back home, who traffic in strife and profiteering. The salt water setting is employed as a metaphor for the courageous to show their stuff and for the weak to commit suicide. The war tension builds to the inevitable final battle between the more technically advanced vessel and the gallant underdog pursuer that knows what honor and respect and discipline mean for civilization. This beautifully photographed nautical tale amounts to the same glorification of war as those pre-Vietnam War Hollywood films regularly hoisted on the screen, as it is tuned into the British and American post-9/11 warlike mood of the majority. France, conveniently, is seen as an obstacle to peace. There’s no controversy in this well-told tale. The Australian Russell Crowe’s performance is broad and every bit as endearing as one of Errol Flynn’s empty matinee idol sea adventure roles, though the chubby looking Crowe’s bleached blond ponytail makes him appear a little tacky. When you add on the goose bump chills caused by the roaring cannonballs lighting up the pristine sea, the hardships of living in tight quarters at sea and the heroics in the face of carnage, it gives this man’s action film the electric charges that have always drawn those to the theater who like such escapist entertainment.

It was filmed in both Baja, Mexico and on the Galapagos Islands. 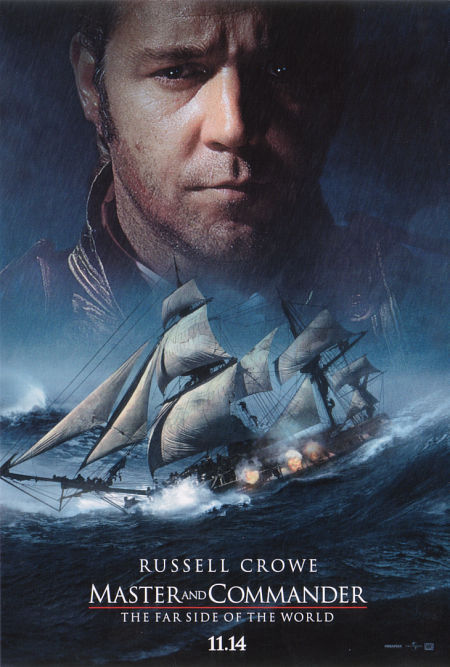