“More than adequately serves as a no-nonsense escapist action thriller.”

Britisher Paul Greengrass (“Bloody Sunday”) directs this follow-up to The Bourne Identity (2002) without losing a beat and even making it slightly more appealing as a pure action story. Doug Liman (now kicked upstairs as an executive producer), helmed the first part. Greengrass keeps the cloak-and-dagger stuff routine but elevates the action-packed pace (I know I felt more dizzy during this one, but that could be because of all the jump cuts and the unsteady handheld camera shots).

“Supremacy” is a thriller based on the best-selling novel series by Robert Ludlum, and is penned by Tony Gilroy. The implausible plot is about a globe-trotting manhunt (from India to Berlin to Russia) involving a confused ex-CIA assassin on-the-run who is trying to figure out his identity and what the hell is going down. Jason Bourne (Matt Damon) is the highly trained former operative who developed a case of amnesia in Part 1 and couldn’t remember what led him to become a CIA drop-out or why he’s being hunted. Having eluded the CIA for the past two years with the help of attractive girlfriend Marie (Franka Potente), he’s now with his doll in Goa, India.

Bourne still has recurring nightmares and intense flashbacks about his mysterious past, but in this film he has a better idea of himself which gives him more of a chance to instinctively react to danger. Chased by a determined Russian hit man (Karl Urban) sent by a criminal Russian oil mogul (Karel Roden), Bourne’s car goes off the bridge and into the water causing Marie to drown. Bourne narrowly escapes the assassination attempt and ends up in Naples, Italy, but learns the hard way that the CIA, under Pam Landry (Joan Allen), is on his case again after a Berlin CIA operation to steal secret documents was botched. Bourne’s fingerprint was left on the crime scene where not only were two agents killed, but secret files and millions in American dollars stolen.

When Bourne arrives in Berlin to straighten things out, CIA boss Marshall (Arana) has already ordered Landry and the testy Ward Abbott (Brian Cox), a senior operative, to go to Berlin and investigate the crime scene. Ward was Bourne’s boss in a secret operation that was terminated after Bourne’s disappearance, and knows him better than anyone else. Ward’s agenda differs from Landry’s, as she wants Bourne taken alive for questioning while Ward badly wants to eliminate the rogue operative and end all speculation about the secret operation. After several more chases over hotel roofs and on trams, we become convinced how clever, elusive, physically tough and techie smart Bourne can be. We watch the loner silently track down the CIA operators chasing him. This allows us after a series of dark incidents to learn that the plot involves a shady oil deal, sold political secrets, several murders, turncoat agents and cover-ups–pretty much the usual spy material in the post-Cold War period. This contemporary look at the spy agency follows the recent investigative disclosures on how the agency fumbled the ball before 9/11. It can’t resist taking another shot at the CIA by not portraying it in the best light.

The deadpan Damon gives a solid performance as an efficient fighting machine but an emotionally vulnerable James Bond-like figure, who acts without flash flexing steel-like nerves in a Superman role that is almost all physical but without the usual clichés. One of Bourne’s specialties is to call those who are after him and in turn spy on them through his telescopic lens while conversing with them. Greengass limits the film to being all action requiring almost no brainwork, but it excites the senses and more than adequately serves as a no-nonsense escapist action thriller.

The film remained tense, thanks to the demonstrative mood sustained throughout. It will be remembered for all its exciting chase scenes and not its slight plot or its interchangeable pasty-faced characters. The concluding chase scene of Bourne in a taxi outmaneuvering what seemed like every police car in snowy Moscow and then outlasting the Russian assassin in an Indy 500-like run through a prolonged highway tunnel, is one of the best of its kind ever filmed. 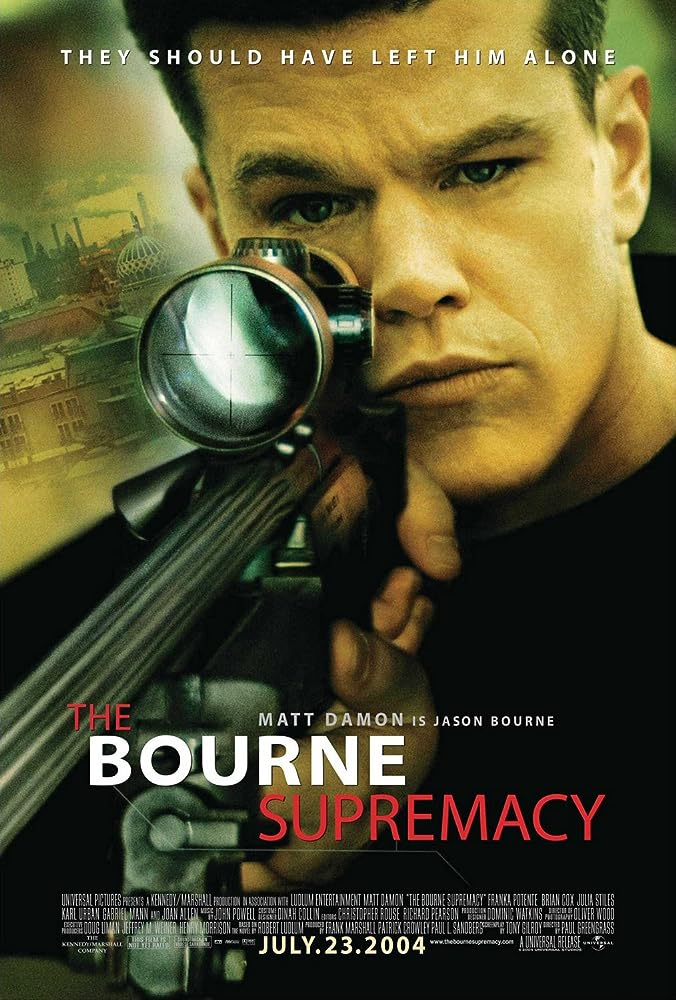