MARK OF THE GORILLA

Frank Bentley (Selmer Jackson) is the warden of the Nairobi Game Preserve who writes his friend Jungle Jim (Johnny Weissmuller) about gorilla attacks on rangers around the preserve, when it’s known there are no gorillas in that area. Jungle Jim investigates and brings along his frisky small dog Skipper and playful chimpanzee. Before you can say it can’t be men-in-gorilla suits, Jungle Jim has to rescue from another gorilla attack a young woman named Nyobi (Suzanne Dalbert) riding alone in the game preserve when she got lost from her caravan. Jim takes her to the preserve, where he’s greeted by Barbara Bentley (Trudy Marshall), the warden’s niece, and learns the warden is bed-ridden with a mysterious illness. Disregarding Dr. Brandt’s (Onslow Stevens) failed treatment, Jim uses native herbs and the warden recovers enough to tell Jim that the Nazis during war stole gold from the African country of Shalikari and hid the loot in the mountains of the preserve. Not realizing Brandt is the leader of the treasure hunters who disguise themselves as gorillas to scare off visitors, Jim follows the doctor’s instructions to let his patient sleep. Brandt’s accomplice Kramer (Robert Purcell) then dons a gorilla suit and strangles the sleeping warden before he can tell Jim what else he knows. But when Jim learns that Nyobi is the princess of the country that the Nazis stole the gold from, he hunts them down and retrieves the gold with the help of the rangers. 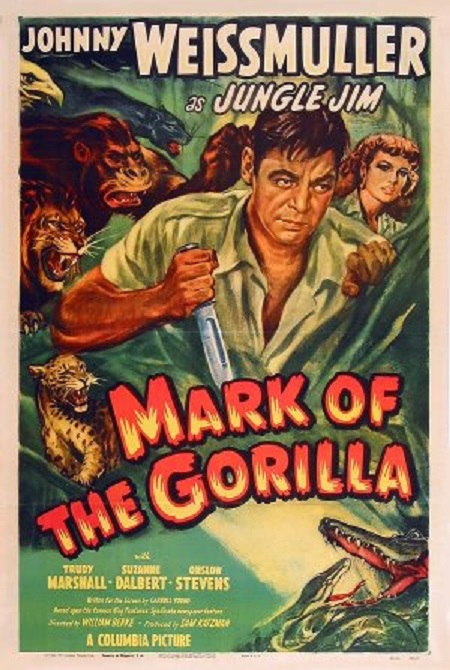