“This plotless film is filled with a zillion little nostalgia stories that are both pointless and irritating, but some stories can also be devilishly charming.”

If it looks like a play and acts like a play, then it must be a play. This stagelike film is based on David Mamet’s sentimental first play he wrote around 25 years ago, and is directed with passion by regular Mamet actor Joe Mantegna. Its nuttiness is in the feelings it arouses for the storytelling old-timers, who spill out their guts about their lost dreams, life’s stings, and their search to justify who they have become. This plotless film is filled with a zillion little nostalgia stories that are both pointless and irritating, but some stories can also be devilishly charming. It’s all a matter of perspective — and the salty characters, who are aboard this steel freighter docked out of Chicago and set to travel in the Great Lakes, give it their best shot to bring life to such a dated project. Mamet’s work is autobiographical and is based on his youthful experience in a summer job aboard a Great Lakes boat such as the one in the film. It’s a coming-of-age film and Mamet’s alter ego is second year English lit grad student in a school outside of Boston (a subtle way of saying Harvard), Dale Katzman (Tony Mamet-David’s kid brother), who is the innocent 23-year-old absorbing all that manly experience. The music is by another brother, Bob Mamet. With the cast consisting of Mamet regulars, the film takes on the look of a family affair.

The movie is steeped in bitter-sweet reflections of the men’s loneliness and their need for brotherhood, as the comedy fades out and the gruff middle-aged men’s lives are examined by the stories they tell and the conversations they initiate as the young writer uses them for future material. The film always felt heavy, and could never get past its awkward retreat into juvenilia via flashbacks of the past and the telling of one or two stories too many. But the solid cast bails it out from being a disaster, and Robert Forster as Joe Pitko dazzles with a moving performance as someone who failed to act on his youthful dream to be a dancer and now drinks to forget his sorrows. His memorable statement after listening to the young Dale’s plans about returning to college is: “You got it made.” Joe, a veteran of 33 years on the job, has clearly seen himself, maybe for the first time, through his bunkmate Dale, and realizes it’s too late for him — that life has passed him by.

Dale is informed when he boards that he’s been assigned to be the night cook and cabin cleaner as a replacement for Guigliani (Garcia), a roguish character and crew favorite who mysteriously didn’t make it aboard on time. Rumors circulate that he was mugged and badly beaten outside of an East Chicago bar, as he has a reputation for being flashy and going on drinking binges with chicks. The running gag grows stale about Guigliani’s disappearance, as no one knows what happened to him but each crew member takes a shot at making a bad guess.

The one in charge of the Seaway Queen is the fiery and obese first mate, Charles Durning. He’s called Skippy because rumor has it he was once an actual skipper of a boat that went out to sea. George Wendt is Collins, his lookalike loyal second-in-command. Denis Leary, the youngest of the group, is the ship’s fireman who adjusts to his painstaking job of watching the four pivotal gauges by taking reading breaks in the middle of working. Peter Falk plays an old-timer — a talkative pier worker, while the other old-timer deck hands besides the character Robert Forster portrays are — J.J. Johnston as Stan and Jack Wallace as Fred. Stan is a rummy who idolizes Steven Seagal, while Fred is embittered after his divorce because most of his paycheck goes for child support.

To like this stagelike work, is to love it for all its idle chatter and hokum. That’s a lot to ask of the viewer, but Mamet lovers should bite into the playwright’s unique gift for using language as a sword. Others might find it a dull sea voyage among old fogies who can’t stop telling trite tales. I thought the film didn’t have enough drama to work as a feature film, but it had its few witty moments. 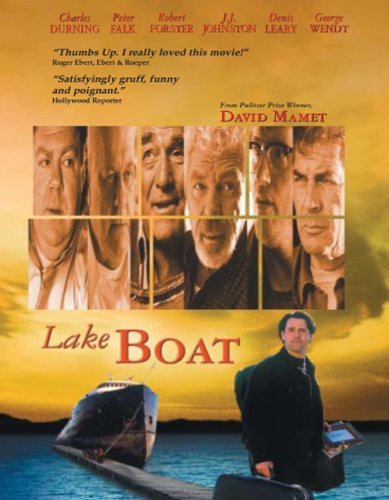