MAN WHO SHOT LIBERTY VALANCE, THE

This is John Ford’s most complete vision about the passing of the Old West and the telling of how legends are made. Ford uses the famous quote, said in the film by a newsman, “When truth becomes legend, print the legend.” Over the years “Liberty” gained in reputation as a classic Western of repute, though when it first was released many critics panned its overly nostalgic characterizations as hogwash. The film’s fascination lies less in what it is in itself than in what it says about both the viewer’s and director’s idea of a Western. I found it lively but in a cartoonish way, and too awkward and too obvious to move me over to its side. It became for me also too annoying in its cornball characterizations and pining for nostalgia, but I did appreciate somewhat a few of its comedic scenes as farce. But if you’re a fan of John Ford and relish in his career long simplistic sentiments of the way good triumphed over evil in the West, reminding me of the shallow way President Bush 11 looks at history, then you might take pleasure in the way Ford laid out many of his familiar themes of the dispute between the untamed prairie and the cultivated garden. Those conflicts make up the myths of the west that movie lore has exploited until the Western has become almost extinct in modern filmmaking. This b/w film, shot on a soundstage, was also the last Western made by Wayne and Ford together.

The film opens as the train pulls into a sleepy frontier town called Shinbone and two dignified elderly passengers embark, Ransom and Hallie Stoddard (James Stewart & Vera Miles), who are met by an elderly man with a horse and buggy by the name of Link Appleyard (Andy Devine). The cub reporter at the station doesn’t recognize them, but the trainman points out that’s the respected Senator Stoddard returning to the town where he became famous. The reporter informs his editor (Carleton Young), who requests an interview to find out why he returned. When he tells the newsmen of the Shinbone Star that he once worked for the paper and that he’s here for the funeral of Tom Doniphon (John Wayne) and indicates he wants to visit his old friend without fanfare, he realizes no one else seems to know of old man Doniphon’s funeral as a pauper. So Ransom decides to relate the whole story to the local press– the way things really were in the old days before the railroad changed things.

As Ransom starts his tale there’s a flashback dissolving back to the time he was a tenderfoot and arrived by stagecoach from back east after graduating law school, as he was following the advice of Horace Greeley. His stagecoach was robbed by Liberty Valance (Lee Marvin) and his gang, who administered a severe whipping on him when he defended a widow being robbed. The hard-as-nails Tom Doniphon found him unconscious on the road and brought him to his Swedish girlfriend Hallie’s house for treatment. Asking the cowardly but lovable marshal, Link, to enforce law and order, turned out to be a useless exercise. The obese, buffoon-like marshal refuses to help, as he has his eyes only on the pancakes Hallie is serving. The laughing Tom responds that a gun is the only law in these parts. But this doesn’t stop Ransom from swearing to put Valance in jail, using the law not a gun. Without money, Hallie’s family takes him under their wings and he works as a dishwasher in their family restaurant and also on the newspaper for the lovable and drunken editor Dutton Peabody (Edmond O’Brien). Soon he’s teaching the illiterate Hallie and many others in town how to read and about democracy, and receiving the sneers of Tom for not being handy with a gun and for stealing his girlfriend. Tom is the only one in town who can stand up to the obnoxious bully Liberty, played by Marvin in a hammy cartoonish manner. After being bullied by Liberty again in the restaurant, Ransom goes against his beliefs and learns how to shoot a gun by taking target practice.

Dutton prints in his paper the story of how the territory is divided over the cattlemen, who have hired Liberty’s gang to keep the farmers out and make sure the “open range” policy continues, and the peaceful town-folks who are calling for statehood–meaning progress through schools and law enforcement. The town-folks meet in a bar and elect two delegates to their regional territorial convention to represent their point of view (there were no women or blacks allowed to vote), and after Tom turns down the nomination they select Ransom and Dutton over Liberty. This causes Liberty to go berserk and administer a near critical beating of Dutton, and then bait Ransom into a gunfight. When Ransom refuses to run away with the help of Tom and his black servant friend Pompey (Strode), a gun duel takes place in the street. Unknown to Ransom at the time–Tom acted as his protector and killed Liberty. After this incident, Ransom becomes known as the man who shot Liberty Valance and his career takes off with the “New West” and the romanticized real hero Tom becomes a forgotten man.

For Ford, the end of the Old West signals the end of a romantic heroic age in the history of America. There are many links in the film that show the passing. The most obvious is the dusty stagecoach in mothballs compared to the speedier and more convenient railroad that moves through both the past and modern American worlds. But for Ransom and Hallie the link with the past is in the more personal cactus rose. It was given to Hallie by Tom to show that even in the rough frontier wilderness a flower could survive. But I can’t get all misty eyed over Ford’s legendary take on the Old West and his attempt to show that the greatness of the country came from those heroic roots, as he dismisses in importance whether all the stories are true or not and how short memories are for Americans. The way Ford sees it Stewart had the vision what America should be like, but if it wasn’t for Wayne’s gun that vision would never have happened. I found this history lesson less than genuine and far too simplistic and chilling, even though the film had some value as entertainment fodder. 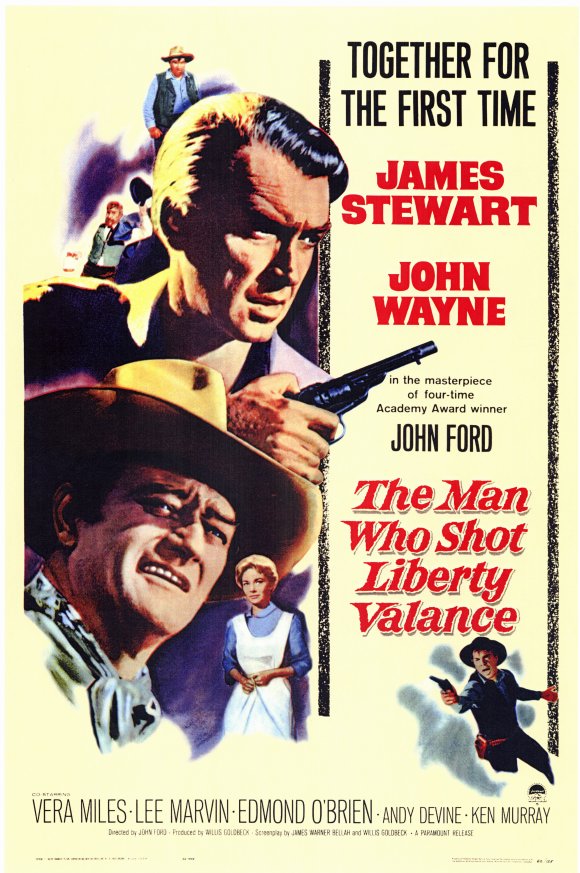