Bradley Jackson directs his feature film debut. It’s a baseball documentary on a nice guy great legendary pitcher from Alvin, Texas who throws fast balls. He retired in 1993 at 46 years old after 27 years pitching for the New York Mets, the California Angels, the Houston Astros, and the Texas Rangers. He threw 7 no-hitters, hit the radar gun at 100.9 mph, had 5714 career strikeouts, and broke 51 Major League Baseball records. But never won a Cy Young.

The satisfying film is told from the point of view of the hitters who faced him and the teammates who idolized him (both are seen here as talking heads) and the wife Ruth he met in high school.

The film has a narration, film clips, and interviews. Two of Nolan’s children are behind it — sons Reese Ryan and Reid Ryan are listed as executive producers.

It shows how Nolan overcame early on control problems to develop into a masterful pitcher.

It’s a sweet film for the baseball fan who cherishes memories when the baseball greats were great on and off the field.

Nolan was a first-ballot inductee into the Baseball Hall of Fame, in 1999.

The noncontroversial film was well produced, well written, well directed and filled with enough baseball nostalgia to fill a baseball stadium and shoo away someone who is not a fan of the once nation’s pasttime. 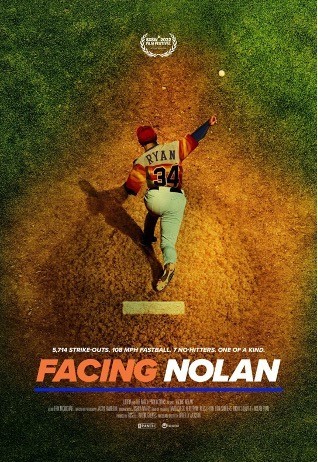