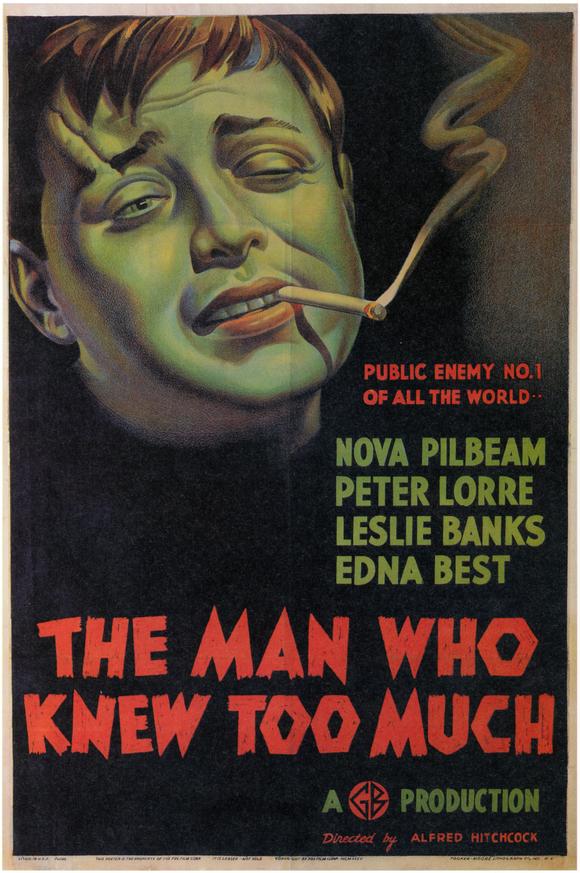 MAN WHO KNEW TOO MUCH, THE

This early Alfred Hitchcock (“Young and Innocent”/”Torn Curtain”/”Jamaica Inn”) thriller is much more fun than the more expensive and longer 1956 remake with James Stewart and Doris Day. Hitch takes an implausible plot and gives it life as an exciting suspense yarn that’s filled with a splendid mix of slapstick and gallows humor, and terrific set-pieces. It proved to be the international “breakthrough” film for the British director. It’s the first English-speaking role (learned phonetically) by Peter Lorre. Writers Edwin Greenwood and A.R. Rawlinson adapted it to film from an original story by Charles Bennett & D.B. Wyndham Lewis.

The Lawrences, Bob (Leslie Banks) and his wife Jill (Edna Best), and their adolescent daughter Betty (Nova Pilbeam), are Londoners on a skeet-shooting vacation at the ritzy Swiss resort of St. Moritz. A convivial Frenchman working for the British “foreign office” named Louis Bernard (Pierre Fresnay) is killed by a sniper when dancing at a night-club with his friend Jill. While dying he tells Jill there’s a message in a brush in his bathroom. The message tells of an assassination about to take place in London of an important foreign diplomat. At the British embassy, Bob receives a message from the assassin saying they kidnapped Betty and if he blabs to the police they will kill her. Back in London, the frantic couple enlists the help only of trusted Uncle Clive (Hugh Wakefield) and track the gang down through the clues from the message and by getting their location by tracing a call from the kidnappers (which comes through the courtesy of the foreign office secretary named Gibson). They first go to a dentist office on the East End and then locate Betty being held in a nearby mission chapel by a cult sun worshiping group. Meanwhile, even though Bob is held hostage by the spies led by the smirking Abbott (Peter Lorre), Clive escapes and tells Jill that the assassination will be tonight at a concert at the Royal Albert Hall (shot in the Lime Grove studio and by using a painting by the academician Fortunino Matania reflected with a mirror into the camera lens, it served as an impression of the Albert Hall audience). Unable to contact the police, Jill goes to the concert alone and screams before the sniper (Frank Vosper) can kill the diplomat at the clash of cymbals. This saves the diplomat’s life, and the climax has the marvelously staged police “Siege of Sidney Street.” Jill, whom we already know is an excellent marksman from the first scene in Switzerland, picks up a police rifle and kills the spy using her daughter as a shield.

It might be too stagy for today’s standards, and we never learn why the assassination attempt. But all that is forgivenby how wonderfully incongruous it all turned out.