Wacky pre-Code saucy comedy about a misunderstanding. It’s skilfully directed by Russell Mack(“The Band Plays On”/”The Stolen Jools”/”Private Jones”), and is based on the A. H. Woods play. The screenplay is by Walter DeLeon.

Well-known defense lawyer Richard Smith (Edward Everett Horton), serious by day but at night a ladies man, is asked by nightclub impersonator Felix, The Great Zero (also Horton), if he can impersonate him in his act and Richard agrees only if he can stay one night in his house and fool his spying mother-in-law Mrs. Mantell (Maude Eburne) while his wife Madeline (Esther Ralston) is away at a mountain retrea. Richard has a few dates planned that night, and goes on them while the impersonator stays at his place. When Madeline unexpectedly turns up that night and wants some romance with her hubby, the real Richard is out with his new secretary Kitty (Patsy Ruth Miller) and afterwards with his married but soon to be divorced client Diane (Laura La Plante). While Felix tries his best to fend off Madeline’s bedroom moves all night with excuses about a cold, in the morning the real Richard shows up before the impersonator leaves. Soon a drunk Diane arrives asking Richard to pay the taxi driver. Coincidentally, Diane is the wife of Felix. Both men are left thinking their wives were unfaithful and must deal with the awkward situation. 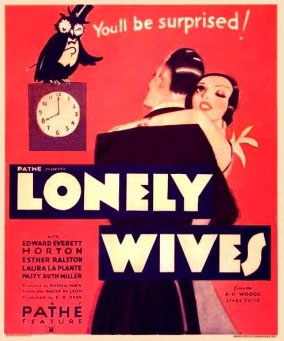