MAN OF THE WEST

Anthony Mann’s (“The Naked Spur”/”Bend of the River”) classic western, “Man of the West,” is an uncompromisingly frank look at the Old West. It plays like a Greek tragedy (the son must kill his surrogate father in order to survive). It tells a tale about linking the “Old” and the “New” West with a cowboy interestingly enough named Link–played by the legendary Western actor Gary Cooper (his stature is such that he’s an iconic figure who is himself a link to the past ways Hollywood filmed Westerns).

Cooper’s character is someone with a troubled past who unexpectedly finds it is haunting him again, whereas he once again has to prove he is a truly changed man to fit back into his present reformed status. The ex-outlaw will be the “link” between the rough-and-tumble Old West he has learned to live with and the emerging capitalism of the modern West, where he feels uncomfortable surrounded by card sharps, fancy saloons, and modern conveniences. Mann’s reflections include how the Old West is rapidly changing into a more civilized place, going from stagecoaches to railroad travel; and, it’s made perfectly clear that whoever can’t change with the times will become a ghost and places that can’t change will become ghost towns.

Writer Reginald Rose (a noted TV dramatist) adapts it from the book The Border Jumpers by Will C. Brown. Cinematographer Ernest Haller does a good job catching the splendid western vistas and isolation in the wide-open spaces. It’s a beautiful visual pic that should be seen on the Big Screen to be fully appreciated.

The film opens with a cautious Link Jones (Gary Cooper) carrying a satchel with gold pieces and boarding a train in a frontier small-town and heading for Fort Worth, Texas, where he, as a leading citizen, has been sent to recruit a schoolteacher for his small community with the money the poor citizens trusted him to carry even though they know he was an ex-outlaw. Before boarding the train Link’s questioned by the suspicious marshal about talking to a known con man and asked if he knows Dock Tobin (Lee J. Cobb), a wanted bank robber who is holed up somewhere in this territory (this will play an important part in the story later on).

The train is robbed by a gang on horseback before reaching its destination. When the train suddenly takes off to abort the hold-up, Link, unscrupulous gambler Sam Beasley (Arthur ‘Connell) and sultry dancehall singer Billie Ellis (Julie London) are left stranded in the desert wilderness. They are the three candidates in the film most likely to convert (with the Cooper character required to undergo two conversions) and change their wicked ways–a most biblical theme! The unholy trio is left 100 miles from the nearest town with the train only coming by once a week. In order to survive Link takes them to a hidden farmhouse nearby in a verdant pasture where he once lived and is surprised to find his old gang still there — and, even more so, that they were the train robbers and then becomes disturbed (feeling his anger to kill returning again) as the gang treats them as captives in a hostile manner. The gang is led by Link’s former mentor, the evil uncle and father-figure Dock Tobin, who took Link in as an orphan and personally trained him and made him his right-hand man. But Link broke his heart and sneaked away some time ago from this sordid life and lives now as a respected citizen with a wife and two small children. Tobin has gone “half-mad” and lives for the past by mostly envisioning those glory days, and in a drunken stupor gleefully tells his returning favorite son — “Do you remember Uvalde…eleven thousand dollars…you held him, I took off the top of his head.” Tobin’s plans are to have Link become a permanent gang member again and get him to use his smarts to help his inefficient gang rob a bank in Lassoo before fleeing over the border to Mexico. The problem is that Tobin doesn’t realize Lassoo has become a ghost town and is no longer the prosperous town it once was.

Link’s only way of saving his companions is to play along with Tobin’s scheme. His only hope of personally escaping his bitter fate is by returning to his baser instincts to kill again and free himself completely from his malevolent former patriarch and the vicious gang that includes: a mute idiot named Trout (Royal Dano), just a plain old idiot named Ponch (Robert J. Wilke); and, Link’s cousins, the mean-spirited siblings, the crazed Coaley (Jack Lord) and the embittered Claude (John Dehner), who plans to kill him because he knows Link only pretended to come home.

Mann’s last western is a powerful film filled with a brutal off-screen rape, constant reminders of the sadistic nature of the outlaws, and how stark the landscape can be in the “dog eat dog world” created by the Old West and continued into modern times, whose narrative remains suggestively visceral in telling of the archetypal characters, their biblical struggle for survival and truth, and in seamlessly juxtaposing the “Old” and “New” days of the West together. It’s an underrated Western that deserves to be seen again and re-evaluated by critics who might have missed its merits the first time. The film’s major flaw was that Cooper was too old for the role (at 57 he was older than Cobb, but played someone who was much younger than him–which never seemed believable). Jimmy Stewart, Mann’s usual Western hero, probably could have handled Cooper’s part just as well and the much younger actor would have certainly looked better for the part. 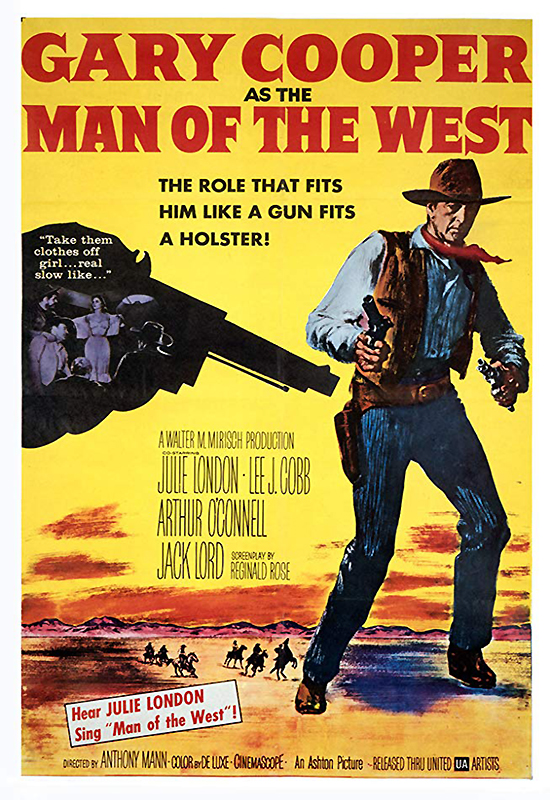