MAGIC IN THE MOONLIGHT

Woody Allen’s (“Bananas”/”Zelig”/”Broadway Danny Rose”) latest trifle is just so-so. It attempts to be spellbinding but is so flat that it only offers a supercilious and uninspired argument over the virtues of reason as opposed to the irrational. The 78-year-old’s 44th film since beginning in 1969, though weak, is still better than most films out there–most ventures don’t even try to reach a mature audience. At least Woody’s films offer more demanding subjects than most, are well-acted and well-produced. They always have a few wiseacre one-liners that click. This one’s best feature is that it’s visually stunning, thanks to cinematographer Darius Khondji.

Internationally acclaimed British traveling magician Stanley Crawford (Colin Firth) is an obnoxious, misanthropic, rationalist, egomaniac, who is a white man disguised for his act as the Chinese magician Wei Ling Soo. After his performance in 1928, in Berlin, his childhood friend and obsequious fellow magician, Howard Burkan (Simon McBurney), meet backstage and the rival invites the cynical defender of logic to come to the south of France and expose as a fake an American clairvoyant, Sophie Baker (Emma Stone), that he couldn’t debunk but is sure that she’s not on the level. Appealing to Stanley’s vanity, Howard entices the self-proclaimed greatest prestidigitator and debunker in the world to accept the challenge. Sophie and her controlling mom (Marcia Gay Harden) have convinced most of the wealthy American Catledge family, money gained from an inheritance in Pittsburgh industries, residing for the time being in one of their luxury homes at Cote d’Azur, that she can communicate with the spirit world and has made contact with the widow Grace’s (Jacki Weaver, Aussie actress) late husband. Sophie has also pleased her gullible daughter Caroline (Erica Leerhsen) with her occult performances. She has also maneuvered herself to become engaged to the family’s ukelele-serenading handsome lovesick son Brice (Hamish Linklater), a twit who worships her as a goddess and has arranged vacations for them in the Greek isles and in Bora Bora. Meanwhile Sophie’s greedy hustler mom, seeing the naive matriarch socialite as merely a mark, pounces on this chance of a lifetime to go from being humble to being rich and has convinced the widow to finance a foundation for her mind-reader daughter.Brice’s brother George (Jeremy Shamos), a psychiatrist, sides with Stanley and goes along with his guest’s disguise as a businessman and alias of Stanley Taplinger in order to trap the charlatan. Stanley also gets matronly advice about life from his sly Aunt Vanessa (Eileen Atkins), a neighbor from nearby Provence. Auntie is easily the most likable character in such a sleigh of hand film.

In the frivolous and tiresome argument fought over who is right, science or spiritualism, we in the end are supposed to believe that magically the much younger polite and attractive Sophie is not a gold digger and falls in love with the rude and smug middle-aged rationalist. After his comeuppance, he magically falls in love with her and undergoes a change of heart even if the cad still spinelessly ditches his more suitable fiancée Olivia (Catherine McCormack) for someone who does not share his world views. We are supposed to cheerfully support this rancid love affair even if it stinks to high heaven.

Where is the magic in the film? I didn’t see it in any of the relationships, in the seances or in any of the strings Woody was pulling to magically dream up another fake sentimental Hollywood love story that has plenty of polish but lacks charm and conviction. 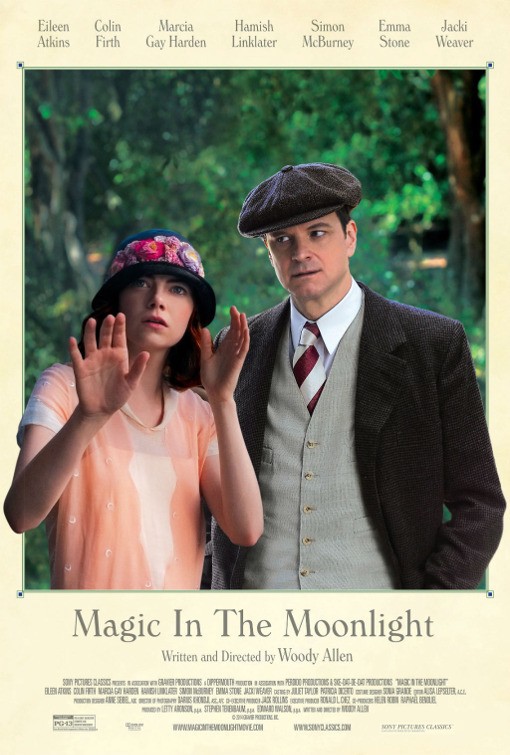