“The film has too many spots where it’s on slippery footing, but is acceptable entertainment for the entire family and one that’s especially fit for the kiddies.”

Twentieth Century Fox’s Ice Age is a clever animation film by co-directors Carlos Saldanha and Chris Wedge (won an Oscar for the animated short “Bunny”). It might have been better off aesthetically if it was entirely about a computer-generated Scrat (for “prehistoric squirrel/rat”) who is shown in the trailer as it picks up on a running gag for those in the know about those “Road Runner” cartoons, as the Scrat tries desperately to gather in a large acorn buried in the frozen tundra some 20,000 years ago (The film’s opening shot is of a fidgety squirrel desperately trying to bury an acorn in the icy terrain).

The publicity department has worked overtime to sell its main storyline drawn from the time period of the Dawn of Man. It’s about an abandoned human baby returned to his human herd by an unlikely mismatched trio of a woolly mammoth, a sloth, and a sabertooth tiger. This is a decent but not a particularly original or special work that the public has bought into big time and made it one of this year’s most popular films. The film lacks genuine comedy and seems to rely on making the baby ultra cute, something that doesn’t really materialize as the baby tries too hard to play baby games with the motormouth sloth and the bruiser mammoth who can kill you just with his cold stare but really is good-hearted. It has a shameless heart-tugging moral theme of good instincts overcoming bad ones to sell its family value children’s story. Its suave dialogue is meant to please the parents but might instead get on both the children’s and parents’ nerves, as its only through the film’s visual effects that both groups might be pleased. “Ice Age” is not nearly as interesting as “Shrek” and “Monsters, Inc.,” films it’s most similar to.

As the film opens it features a pesty and talkative Sid the Sloth (John Leguizamo-voice), who is so annoying he was deserted by his own family in their migration south for a warmer climate due to the coming of the Ice Age. He maneuvers his way into teaming up for his own protection with a gruff-voiced loner mammoth separated from his herd, Manfred the Mammoth (Ray Romano-voice, from the TV show “Everybody Loves Raymond”). He’s soft inside despite his hard exterior, but being a contrarian he’s heading north for no particular reason.

The “Ice Age” story revolves around a human baby whose mother tried to save him from an attack by a pack of saber-toothed tigers by jumping into the waterfalls and swimming to safety. Manfred rescues the baby just as his mother dies while she’s pleadingly eying the two with the hope that they will take care of the baby. Sid talks the reluctant Manfred into reversing his direction and helping him bring the baby back to the humans, who are in the process of also fleeing south as the Ice Age nears. Into the mix comes a saber-toothed tiger named Diego (Denis Leary), who was sent by his pitiless leader Soto (Goran Visnjic) to bring back the baby for them to devour for revenge on the humans who killed off many of their members. Diego can’t talk the two into giving him the baby to take back to the humans, so he tries a different tact and talks them into letting them use his natural instincts as a tracker to take them to the humans. Instead he plans to set a trap for them and lead them into the pack of tigers, who can’t individually take down the huge mammoth but can in a surprise attack by the entire pack. Diego who has an ongoing contentious relationship with Sid but stays clear of Manfred only because he fears him, gets a change of heart when Manfred saves him when they are trekking over ice that quickly melts as they walk over it as volcanic fires erupt all around them. Diego says he did it because “That’s what you do as a herd”, which touches the tiger’s heart so much he has a change of heart about the ambush.

There’s also a running gag with Cedric the Entertainer and Stephen Root as a pair of vegetarian rhinos who are real meanies. The film spends most of its journey on the rescuers as they battle with the elements, bond with the baby and each other, and in the one scene where they encounter a flock of inept militaristic doomsday Dodos who are equated with nutcase survivalists who stock up on food because they believe the world is heading for a catastrophe (the joke being that the dodos are now extinct). The film has too many spots where it’s on slippery footing, but is acceptable entertainment for the entire family and one that’s especially fit for the kiddies. 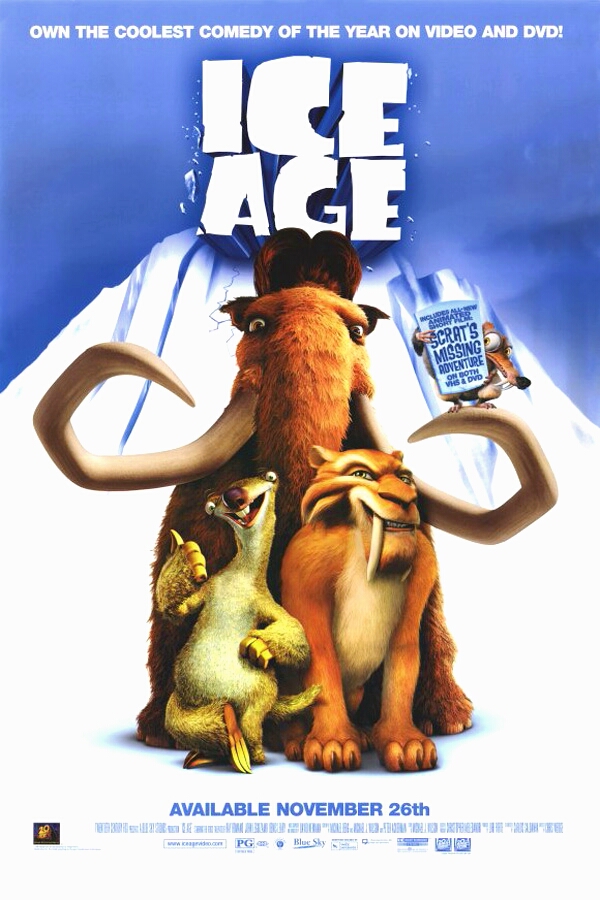