“It’s a striking production, well-acted, that sets a powerfully dark tone and mood, and is a remarkable visionary film.”

Australian director Justin Kurzel (“The Turning”/”The Snowtown Murders“) gives Shakespeare’s tragic Scottish play Macbeth its most violent turn and makes it impactful as cinema by breaking some rules and not caring about being academic. Of the many versions of Macbeth on film, this version matches up favorably with the best two–the Orson Welles one of 1948 and Akira Kurosawa’s visual poem of 1957 “Throne of Blood.” It was shot in the Scottish Highlands during mostly inclement weather.

It tells the story of a fearless power-hungry warrior in the war torn Scottish landscape, who is tragically brought down by ambition and desire. In the end Macbeth comes off as a thug.

Writers Todd Louiso, Jacob Koskoff and Michael Lesslie give it a lively update without losing anything Shakespearean despite trimming some dialogue and iconic scenes. While director Kurzel is not bashful showing graphically bloody slo-mo sword battles.

Macbeth (Michael Fassbender) is the Thane of Glamis, who would be king, and Marion Cotillard (French actress) is superb as his evil pushy Lady Macbeth, who knows how to push hubby’s buttons.

It begins with the chilling opening scene of the Macbeths burying their dead infant (not in the play) in the foggy moors, the appearance of the three witches (whose prophesy is that Macbeth will be king), a bubbling cauldron and an eye of a newt, and yelling soldiers with faces covered in war paint as they prepare for a battle with Macbeth fighting for King Duncan (David Thewlis) against the invading Norwegians led by Macdonwald (Hilton McRae). The weird sisters roam the foggy Scottish moors, appearing periodically speaking in riddles. The play was fixated on aspects of black magic, but the movie mutes much of that and asks us to look more carefully at Macbeth’s freedom of will and his guilt-trip.

Jack Reynor as Malcolm gives us a robust performance as the heir to the throne. David Thewlis sparkles as King Duncan, who Macbeth stabs to death to get his crown instead of Malcolm. It’s then that the unhinged Macbeth, fresh from defeating the Norsemen, orders to death his onetime lieutenant, Banquo (Paddy Considine), and will later murder the family of his foil Macduff (Sean Harris). This leads to Macduff and Malcolm teaming up to seek revenge on Macbeth.

It’s a striking production, well-acted, that sets a powerfully dark tone and mood. It’s a remarkable visionary film. The only faults might be the thick Scottish brogue being a toughie on American viewers and purists might not go for a few iconic scenes removed from the play. 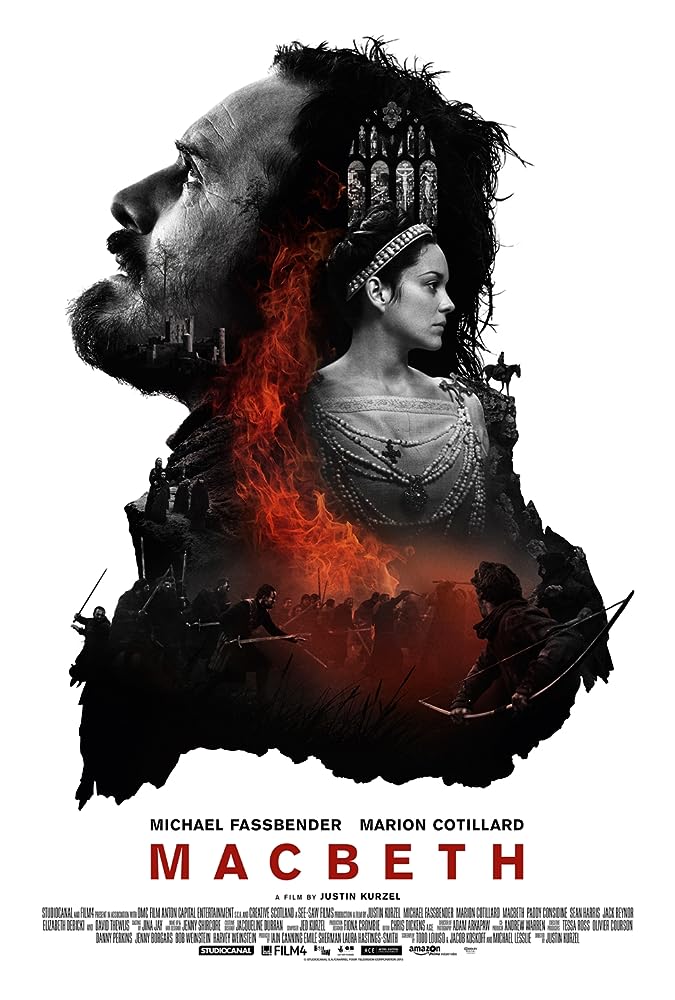