Former film critic Lindsay Anderson’s (“O Lucky Man!-1973″/”Look Back in Anger-1980″/”Britannia Hospital-1982”) sharp allegorical satire on Brit society is a controversial drama as seen through life at a English boys’ boarding school. It perfectly captures the mood of the time of those who rebel against the repressive status quo. The school becomes an ideal metaphor to represent British society.

It opens at the end of the summer break as students return to this traditional elite institution that goes back a thousand years and it ends at the close of the school year with a surreal climax. Those called the whips (prefects) rigidly enforce the draconian school rules among the seniors and the juniors. One junior named Jute is agog at the confusing first day and finds himself bossed around by the seniors who refer to him as scum and by the stern unfriendly attitude of the whips, especially the head one called Rowntree (Robert Swann).

Mick Travis (Malcolm McDowell) and Wallace (Richard Warwick) are fun-loving rebellious seniors who sneak into town on a stolen motorcycle and romance a waitress. The whips decide to punish Mick, Wallace, and Johnny (David Wood) with a caning because in general they have a bad attitude toward the school. While on a work-detail because of more discipline problems caused at a military exercise, the trio discover a cache of weapons, grenades and gas bombs. On Founders’ Day when a windbag general (Anthony Nicholls) is speaking about the need for tradition and discipline, the three rebels, the waitress and an abused junior Bobby Phillips, the subject of homo-erotic gestures by the whips, call themselves the Crusaders and drop smoke bombs in the assembly and start firing from the nearby rooftops on the establishment figures (staff, parents and students) as they exit the school bringing on a massacre.

Anderson paints an ugly picture of the boarding school and the English system that tolerates these sadistic and meaningless rules to maintain discipline, and clearly sides with those who rebel–even if they resort to violence. The so-called progressive headmaster (Peter Jeffrey) is shown to be a phony only mouthing platitudes about accepting social change but never allowing for this change to take place. The climax is lifted from Jean Vigo’s 1933 Zero de Conduit.

It plays as a landmark 1960s counterculture film that speaks the anarchist language of those who choose revolution by romanticizing violence and filling themselves with jingoistic slogans such as ‘there’s no such thing as a wrong war’ and that ‘one man can change the world with a bullet in the right place.’ Filled with passion for its cause and aptly picking up on the heavy vibes for its time, nevertheless its revolutionary message seems facile and questionable when viewed at this later date even though the repressive nature of society still hasn’t changed that much. 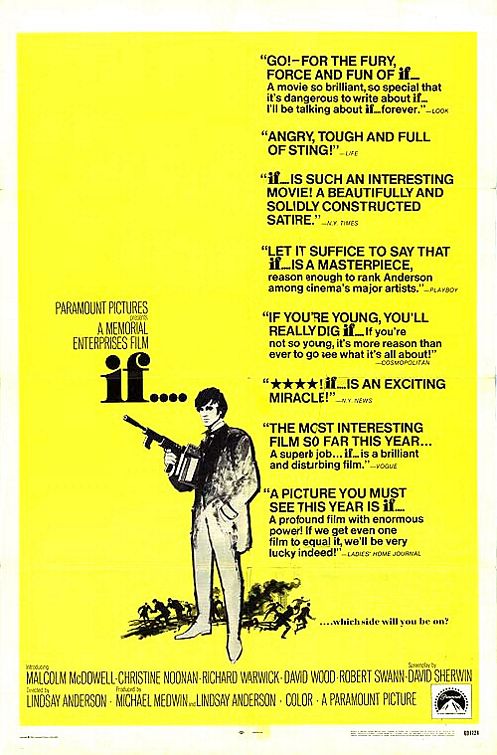