A steamy melodrama based on a true story that’s set during Franco’s Spain in the 1950s. This story starts out as a funny and erotically Madrid based version of Last Tango in Paris before changing directions to noir territory and tragedy (becoming like a “Carmen” without music or humor). It’s cowritten and directed by Vicente Aranda (“The Blood Spattered Bride”/”Blood Castle”/”Change of Sex “), with the other writers being Alvaro Del Amo and Carlos Perez Merinero. It was Spain’s highest grossing film of that year and swept the field in the Spanish Oscars—the Goya awards. Its star Victoria Abril took home a Silver Bear at the Berlin Film Festival for her sultry performance. Though well-executed, there’s a disturbing emptiness to it that never makes it memorable or moving.

Paco rents a room from the attractive young widow Luisa (Victoria Abril), who makes ends meet through her underworld connections as a grifter and her part-time clerk job in a pharmacy. The uneducated Paco finds himself unsuited for his brick factory job and while frustrated in looking for work spends his days in bed with the seductive Luisa, who treats him to unbelievable sexual ecstasy.

When Trini suspects the affair, she has sex with Paco on the advice of the commander’s wife Dona Elvira (Mabel Escaño) who believes all men cheat and the wife can keep hubby home by satisfying his demands. The problem is that Paco is still overwhelmed with Luisa’s bedroom moves and can’t give up either of his opposite babes, but sex is more important to him than a good woman and reluctantly chooses Luisa. When Luisa owes some big money to her ruthless crony gangsters who threaten her with a maiming if she doesn’t ante up, Paco comes to the rescue with a heartless plan to pretend to marry the trusting Trini and scam her of all the money she saved after she is willing to buy him a country inn with it.

Aranda was one of the founders of the “Barcelona School” during the 1960s, who never got his proper due outside of Spain. This salacious story is directed with taste, but nevertheless it never touches the heart as the three main characters are too nebulous in their depictions to get worked up about and the murder of the good heroine seems as abstract as those one reads about daily in the tabloids. 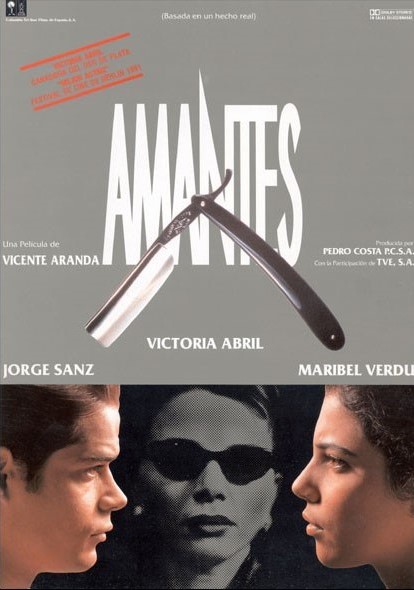