A lively rendition of James Fenimore Cooper’s classic action novel The Last of the Mohicans that captures the frontier spirit. It’s directed by George B. Seitz and adapted to the screen by writers Philip Dunne, John L. Balderston, Daniel Moore and Paul Perez. It’s set in upstate New York in 1757 during the French-Indian Wars, telling the adventure story of Hawkeye (Randolph Scott), the white American hunter and scout. Hawkeye is accompanied by his faithful Mohican guides, Chingachgook (Robert H. Barrat) and his son Uncas (Philip Reed). They are the last survivors of the Mohican tribe.

Prime Minister William Pitt persuades George II that North America is valuable and worth fighting the French for. The French have the savage Hurons fighting on their side, and under the leadership of General Montcalm (William Stack) have attacked Fort William Henry. The British commander of Fort Henry, Colonel Munro (Hugh Buckler), has his two young adult daughters Alice (Binnie Barnes) and Cora (Heather Angel) in Albany with the newly arrived Major Duncan Heyward (Henry Wilcoxon). They are about to embark on a two-day march back to Fort Henry, when the major asks the American settlers to help in the dangerous trek. Their leader, Captain Winthrop (Willard Robinson), agrees but only as long as they can defend their homes against the Hurons. Hawkeye refuses to help, which angers Alice, but when his Mohican guides recognize that Magua (Bruce Cabot) is helping the major they secretly follow expecting a double-cross. When Heyward and the Munro girls are ambushed by Mangua and his Huron buddies, Hawkeye and the Mohicans rescue them and flee by canoe. Heyward is romantically interested in the spirited Alice, but has been spurned. Alice, instead, finds Hawkeye to be her kind of rugged individualist and falls for him. Cora falls in love with Uncas.

Though Fort Henry is under heavy attack, the rescued party sneaks back into the camp and Hawkeye receives the congratulations of the colonel. Uncas leaves, but Alice persuades Hawkeye to stay and help. The fort is attacked for ten days. Uncas returns and is sent by the colonel with a message to General Webb for help; but he is shot. Heyward heroically rescues him. Hawkeye and Chingachgook go to the Ottawa camp and see Magua as an agitator; Hawkeye asks the colonel to release the Americans from their obligation, but he refuses. The Americans sneak out at night, and Heyward orders them shot for deserting. Hawkeye is arrested as a traitor and jailed, and even though Alice pleads with her father to spare him from a death sentence she is turned down.

General Webb’s messengers to Fort Henry are attacked by the Hurons, and when Montcalm learns that no reinforcements are on the way he offers Munro generous conditions to surrender. Munro agrees to return to England, but Magua is not satisfied that he has no enemy scalps and incites the Hurons to attack the British, and Munro is critically shot. Alice and Cora are captured. Hawkeye escapes from jail and with his Mohican guides goes after the Munro girls. Montcalm is upset with the Huron’s uncivilized act and sends soldiers against the Hurons and offers his sincere apologies to the dying Munro.

Heyward is allowed to join Hawkeye’s rescue mission for Alice and Cora. Uncas frees Cora, when he’s killed by Magua she jumps to her death off a cliff rather than become his squaw. Chingachgook avenges his son’s death by killing Mangua in a tomahawk duel. Hawkeye attempts to trade himself for Alice, to burn at the stake; but Heyward knocks him out and takes his place. Hawkeye comes and proves by his shooting skills that he’s the real Hawkeye. Meanwhile Chingachgook guides Alice and Heyward to safety and they come across Captian Winthrop and his men, who rescue Hawkeye in the nick of time. At the court martial for Hawkeye, General Abercrombie acquits him and enlists him as a scout after Heyward testifies on his behalf. Alice says she will stay in America and wait for her man Hawkeye. 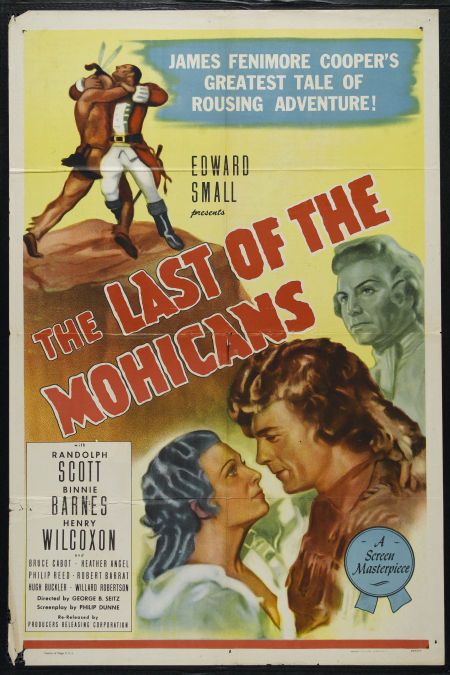