Robert Parigi makes his writing and directing debut in this low-budget twisted erotic horror movie, whose title couldn’t be more on target. Kenneth (Desmond Harrington) is a loser who works in an LA publishing firm as a tech writer, and lives a dreary life as a loner lacking social skills. When Kenneth’s imposing boss Mr. Novak (Rip Torn) gets him a temp typist, Lisa (Melissa Sagemiller), to help in a rush job for a manual, the timid young man secretly desires his attractive blonde assistant but doesn’t know how to talk to her. Kenneth’s playful colleagues show him a deluxe plastic sex doll advertised on the Internet for $10,000, that can be created to look like anyone he wants (he chooses to have the life-size rubber doll, with human-like orifices, look like Lisa and names her Nikki). He keeps Nikki in his almost bare apartment for companionship. It’s fun in a creepy way to watch him have sex with the doll, dress her in store-bought clothes, lavish a great deal of attention on her, regularly converse with her and make believe he’s having a real relationship.

The artificial relationship brings Kenneth out of his shell enough to ask Lisa out on a date, which the naive girl gladly accepts. When he’s about to bang Lisa, he can’t close the deal in a biblical way when he hears Nikki’s voice in his head reacting jealously. Furthermore Kenneth is not only harassed at work by his bullying boss, but by a nosey apartment house manager (Udo Kier), his opium smoking next door neighbor, who is always spying on him through the peephole. When Lisa gives Kenneth another chance, she soon discovers she’s a stand-in for a rubber doll and angrily rejects him. Things worsen when his bank closes his account because of an overdraft and his boss fires him. It all leads to a grimly ironic twist ending that seemed more clever than inspired.

Kenneth when on top of his game sums up his philosophy by stating: “Relationships come and go, but Plastination is forever.”

Parigi draws some of his sicko manifestations from Ealing’s classic 1945 horror film “Dead of Night,” featuring Michael Redgrave as a schizoid ventriloquist possessed by his dummy. What Parigi can’t do, after succeeding with a sleazy sinister setup for this horror genre flick, is go beyond its weird comedic and chilling bloody moments. A narrative that should have served as a meaningful psychological take on the objectification of women becomes instead a mechanically derived sexual shocker. Kenneth’s character in the third act takes the sudden leap from pitiful to violently disturbed without a prior hint that we are dealing with a sociopath. As a result, the film sends a false message about freaky sex. 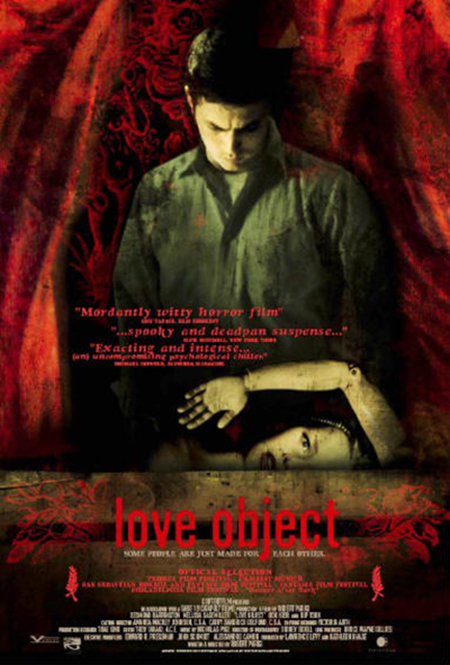