LOVE IN THE AFTERNOON

Billy Wilder (“Sunset Boulevard”/”Double Indemnity”/”Fedora”) directs this sophisticated, mirthful, gossamer of a romantic comedy, made as an homage to his pal Lubitsch. It was adapted by Wilder and I.A.L. Diamond (their first script together) from the novel Ariane by Claude Anet. It was previously filmed in 1926. The original story was set in czarist Russia and concerned a young cello player in love with an older Frenchman. Though receiving mostly good reviews, it only received a modest box-office.

Gary Cooper plays the middle-aged wealthy American playboy Frank Flannagan, who is being tailed by Parisian private eye Claude Chavasse (Maurice Chevalier) for having an affair with Madame X (Lise Bourdin)–his client Monsieur X’s (John McGiver) wife. The widowed Chavasse’s 18-year-old inquisitive conservatory student daughter Ariane (Audrey Hepburn, 28 years younger than the 56-year-old Cooper) overhears her dad tell her client where they meet and the client telling of going to the Hotel Ritz and shooting Flannagan. Ariane takes matters into her own hands when the police ignore her report and goes to the hotel to warn the playboy. Their meeting turns into a May-December affair, with Ariane getting him so jealous that she is often too busy for him because she has 19 lovers (making believe that her lovers are the conservatory orchestra where she plays the cello) that he hires her gumshoe father, not knowing the relationship, to spy on her. When her dad is horrified to find himself spying on his daughter with this sleazy character, he tells his client the truth hoping to break up this sordid relationship. But Flannagan resists, thinking he has met someone at last he loves.

It got around the censors by having Audrey always fully clothed and never caught in a compromising situation.

The relationship between the odd couple, the shy gamine and the philandering older man, didn’t seem likely, there were no insights, the comedy was slight and the film looked stale. It was hard to get excited about such an overlong dreary tale, where Cooper was miscast and the champagne fizzles. 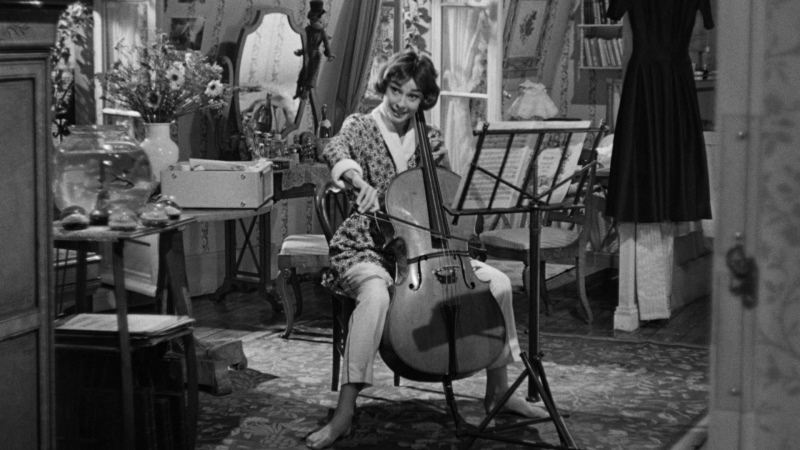