LOVE FROM A STRANGER (aka: A NIGHT OF TERROR)

Rowland V. Lee (“Son of Frankenstein”/”Captain Kidd”/”The Bridge of San Luis Rey“)tautly directs this stagy thriller that’s based on a play by Frank Vosper, which in turn is based on an Agatha Christie story “Philomel Cottage.” The script is written by Frances Marion.

London office worker Carol Howard (Ann Harding) has won the grand prize in the French lottery, but her sudden wealth upsets stodgy fiancé Ronald Bruce (Bruce Seton). He just returned from the Sudan after three years, and the old-fashioned patriarchal bloke refuses to live off a woman’s money. The couple quarrel and breakup. Dapper sophisticate Gerald Lovell (Basil Rathbone) makes inquiries about renting Carol’s apartment, and she quickly falls in love with him when he follows her aboard a ship to Paris. Carol goes there with her roommate Kate (Binnie Hale) to collect her prize money. Ignoring Ron’s warning that Gerald’s references of working as an engineer in a South American oil field don’t check-out, she impulsively marries him. There are early warning signs that hubby is not right, but Carol also ignores them. She buys hubby an isolated country house in Kent that he picks out for her, and blindly signs a document making him the sole heir to her new fortune. The gullible Kate finally catches on hubby has severe mental problems when he refuses to let her in the cellar and yells at her like a madman when she enters the off-limits cellar. Carol also discovers Gerald is a serial killer, and he doesn’t deny it. Trapped in the house with him alone, Carol manages to turn the tables on him and cause him to have a fatal heart attack when he thinks he’s been poisoned drinking coffee.

Rathbone gives an unhinged performance, which should satisfy his fans.

It was remade in Hollywood in 1947, with Sylvia Sidney and John Hodiak in the starring roles. 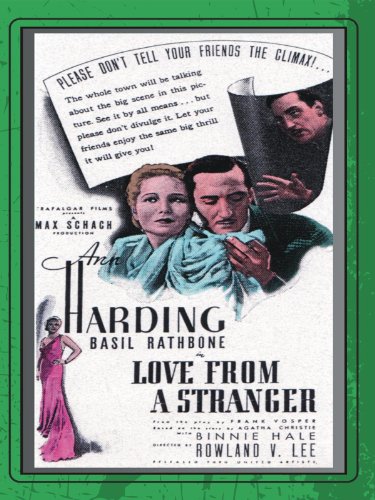