A mostly likable and spirited Dracula pic, played as a silly spoof. The biggest surprise is that George Hamilton, dressed in a cape and black suit, can make for a satisfactory sympathetic and comical Dracula–someone who is a romantic and totally out of place in the cynical, plastic world of the 1970s. This one is campy and is set in the Big Apple, with its gimmicky premise being–What if the legendary vampire Count Dracula didn’t frighten people anymore and was made to be a victim in the crime-infested, jaded and cold-hearted city? Director Stan Dragoti (“Dirty Little Billy”/”Mr. Mom”/”She’s Out of Control”), former advertising man,never quite gets a handle on it–as it’s messy, without style and has the cheap look of a TV movie. But it’s also somewhat funny, if you’re in the mood for such crude outdated low-brow jokes from the 1970s and questionable ethnic jokes that border on racist slurs.

It’s anupdate of Bram Stoker’s Dracula and is written by Robert Kaufman, who can’t make his toothless jokes have more of a bite.

Count Dracula leaves his communist rulers in Transylvania after evicted from his castleto make way for a Romanian gymnastics school and settles in NYC, along with his faithful but whiny, toady manservant Renfield (Arte Johnson) at his side. While living in the Plaza Hotel, Dracula pursues in a disco hottie fashion model Cindy Sondheim (Susan Saint James), whom he desires after viewing an old photo of her in a fashion magazine and fantasizes that she’s the reincarnation of his lost love Mina Seward. Cindy is engaged to stuffy psychiatristDr. Jeff Rosenberg (Richard Benjamin), a descendant of Dracula nemesis Van Helsing, but who is ineffective in getting rid of Dracula when he discovers bite marks on Cindy’s neck. At one point Rosenberg tries to ward Dracula off with a Star of David instead of the traditional film lore cross. 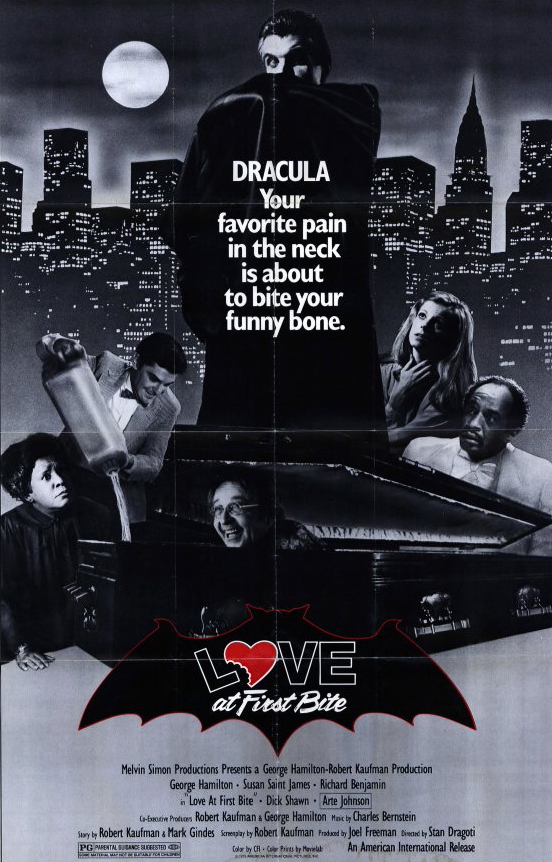