Nick Cassavetes directs in a stilted way this tearjerker soap-opera romance story about star-crossed lovers. It is based on the bestseller novel by Nicholas Sparks; the screenplay is by Jeremy Leven and it is adapted by Jan Sardi. The glossy opening signals how deadly earnest this all too familiar pulp sudser takes itself, as soft piano music plays as an elderly woman looks out of a plantation house window and witnesses a golden orange sunset with a flock of white geese flying slowly over a picture perfect lake with a lone boatman paddling. Think Arthur Hiller’s filming of Erich Segal’s 1970 Love Story and you will see how similar in formula is The Notebook–blandly mixing love and disease (this time subbing Alzheimer’s for leukemia). This maudlin period melodrama was dated and forgettable before the last tear was shed.

The story revolves around a kindly old codger named Duke (James Garner) and his regular visits to read a love story out of a notebook to an elderly female patron (Gena Rowlands, the director’s mom) in a Southern area nursing home. She is suffering from memory loss due to dementia, and it is Duke’s hope the story will bring back the woman’s memory. Duke is in the home because he suffered from two heart attacks and also has a special attachment to the mystery woman that the filmmaker coyly hints at being connected to him, but doesn’t clear up their relationship until the end.

Duke’s tale is about a teen summer romance taking place in the small town of Seabrook, N.C., in 1940 between a visiting city girl, the wealthy Southern debutante Allie Hamilton (Rachel McAdams), and a humble country boy mill worker Noah Calhoun (Ryan Gosling). They are classically drawn lovers from different sides of the track, where she’s pampered and expected to take her place on the top, while he’s on the track of being an ordinary worker. The romance picks up some steam when they trip out (without drugs or booze) by lying down in the middle of the main street late at night, as they find this daring experience shows they have something in common. But the love affair died as the summer ended due to the objections of Allie’s parents. When Allie tries to stay out all night with Noah, her upset parents sic the cops on them. Allie’s immediately sent off to New York to attend a fancy college, as mom insists that she find a boy from her own upper-class circle. Noah writes everyday, but mom swipes the letters and keeps them from her daughter. Why Allie never writes on her own to Noah, since she knows lover boy’s address, sure beats the heck out of me. The separation becomes more permanent when Noah enlists in the army for WW11 and returns after the war to restore, with the generous help of his good-natured widowed dad (Sam Shepard), a Southern plantation house. It’s the dream house he vowed to share with the love of his life before they separated.

Seven years have gone by since the summer romance concluded, and Allie has consented to marry new dream boy Lon (James Marsden). He’s someone her folks are very comfortable with since he’s also a wealthy Southerner from the elite. But just before the wedding, Allie spots Noah’s picture in the local Southern newspaper posing by the restored house and that jolts her memory so much that she goes to meet him.

The film walks down a minefield of contrivances, banal dialogue and sticky love situations, as the story bounces back and forth between Duke reading from the notebook and Allie having to choose between Noah and Lon. Lacking passion, something Nick’s unconventional director father John would never leave out of his films (think “Husbands” or “A Woman Under the Influence”), the conventional story moves slowly in place to clear up Duke’s relationship to the mystery woman (which is hardly a mystery!) and keeps us guessing to the end Allie’s choice in a hubby (also, hardly a surprise!). Watching the young lovers rowing on a duck-filled pond is about as exciting as this film ever gets. 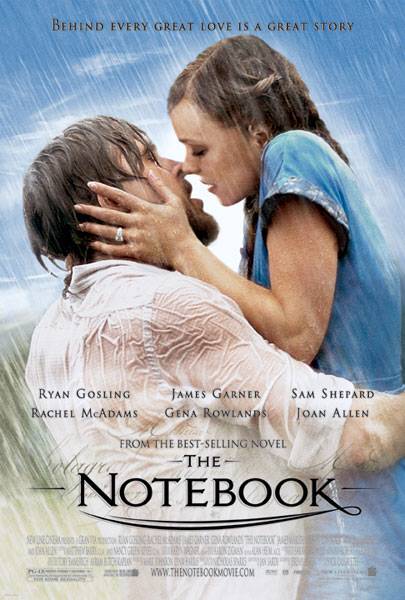