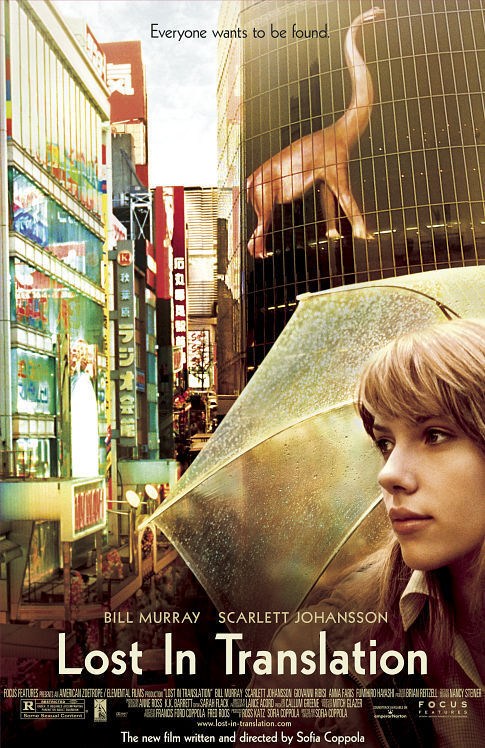 Writer/director Sofia Coppola, the 32-year-old daughter of Francis Ford Coppola and an enterprising owner of a clothing line that does business in Japan, in her second full-length feature after her vexing but promising first-feature of the Virgin Suicides, brings to the screen a brilliantly understated romantic comedy. It sustains the woozy romantic mood it so carefully setup by keeping everything tight and under wraps. Its would-be lovers are in an unfamiliar foreign country and to compound things their heads are spinning around with doubts about their life choices, as they seem to be pulled together because they are both insomniacs due to jet-lag and are bored with the amenities in the same luxury hotel they are staying at–bad TV seems to be a trans-Atlantic thing. After accidentally meeting in the elevator and exchanging smiles they meet again at the hotel’s bar, and after a warm-up conversation they continue to bump into each other and a friendship quietly grows in the week they spend in Tokyo. Their unexpected friendship highlights in a subtle manner how you can just meet someone and know more about them than you do the loved ones you have been with for years. This is shown in many ways. One of the ways is they talk freely to each other and have no problem communicating their inner feelings, while their spouses feel more comfortable sending them faxes than in direct conversations. In Bill Murray’s telephone conversations with his wife, it seems to be mostly about interior decorating and not what is really on his mind. This makes the genial but depressed guy feel even more melancholy. While Scarlett Johansson after leaving her hotel in the hustle-bustle of the downtown pop-culture scene for a visit to a serene Buddhist shrine in Kyoto, finds that she can’t hold back her anguish about what leaves her empty inside and breaks down in tears. When she tries telling this to her mother over the telephone, she can’t convey this sadness to her unresponsive mother. That was a very moving and poignant scene, which tells me that this young actress who has appeared in “Ghost World” and “The Man Who Wasn’t There” has a bright future in this business.

It’s the kind of assuredly directed film that is smartly written with a sparse dialogue allowing the visualizations to explain almost everything, as the middle-aged man in the middle of a mid-life crisis and the precocious early-twentysomething woman connect through their shared feelings. Their magical chemistry together warms our heart despite their vast age differences and their problematic marital circumstances presenting a natural barrier to their growing relationship. Ms. Coppola’s filmmaking is so accomplished, that we can’t help but root for these two to get together in the end, even though when thinking about the film at home and all the filmmaking tricks have vanished–it left me wondering why I cared so much about these two privileged and spoiled characters. But that’s good filmmaking to take such a small story and characters I would not ordinarily give a second thought to, and make me care about them. Lost in Translation is not driven by plot, but it develops the characters so richly that the viewer is totally immersed in their situation and feels as if the dislocated characters have been completely sauced-out. It’s rare in this genre to see such an honest film, as almost everything about it seemed authentic from the sly humor to the misfit’s earnest search for answers to their lives. The only thing that struck a false note, was the yokel mainstream humor of mocking the way the Japanese pronounce their English words and how short in stature they are compared with Americans and how their behavior can be so compulsive. But the filmmaker didn’t go overboard with that kind of ethnic humor, and mostly relied on ad lib scenes with Bill Murray playing the comedy with the necessary restraint to still be taken as a serious player. In the scene filming the commercial with the manic Japanese director Murray was special, as he was in the ludicrous Japanese TV show he appeared on to plug his endorsement.

Bob Harris (Bill Murray) is a famous American actor on the decline, who is in Tokyo to make a Suntory whiskey commercial and be paid a whopping $2 million. He has been married for 25 years and has children still at home he cares about but who are not now dependent on him. He rues over the love having gone out of the marriage and hopes to forget about his unhappiness by drinking what he’s pitching. Charlotte (Scarlett Johansson, at 18, is playing someone, probably, 5 years older) is a recent Yale philosophy grad who is married for two years to a workaholic, self-absorbed celebrity photographer, John (Ribisi), who is in Tokyo for a work shoot and reluctantly took his wife along at her request. The pretty blonde is concerned that she doesn’t really know her hubby and feels so alone that she can’t converse with him or for that matter with anyone else about her situation. John leaves her alone for most of the week, as he goes out of town shooting a rock band.

Both main characters are a study in alienation, and they feel further vexed by not understanding the language or the customs of Japan. Through shared circumstances, they find ways to escape from their doldrums and their unpleasant reality. They both realize sex is not the answer to their problems, so that is not the prize sought. But they soon learn that they are kindred spirits, though at different starting points of understanding themselves. The Murray character could find satisfaction with his life, but can’t explain what went wrong with his marriage. While the Scarlett character doesn’t know what to do with her knowledge, and wonders if she can be a writer or anything that matters. She already realizes her marriage can’t work, and is quizzing Murray about what he has learned in his long journey. The answers from him are very much Buddhist ones, of knowing your inner thoughts and gaining an understanding of yourself. He also gains her trust by showing he can be nurturing, as he takes her to the hospital to get her stubbed toe examined.

This running around together as prisoners on a jailbreak, in a town that they can’t comprehend, leads to them finding each other as “lost souls in a strange land.” They feel comfortable enough to innocently watch television together in bed and go clubbing–to a strip club and later to a karaoke club. All the while a sexual tension builds, with Bob ready to do it and Charlotte wrestling with her feelings and desires. It all leads to how they say good-bye to each other, and we wonder if something got “lost in their translation of what transpired” as they seem all bottled up not knowing how to say their good-bye.

The cinematographer Lance Acord does a fabulous job of making Tokyo and its shining skyscrapers come alive at night for the Americans. There’s one wonderful loopy scene that doesn’t make much sense but was a lot of fun, where the couple escape with her new Japanese friends from their bar friend who is jokingly firing a toy gun that releases brightly lit pellets as the couple laughing like schoolchildren run into a pachinko parlor that is all lit up and exploding. Later they are reunited with her Japanese friends in another karaoke club and Bob does his rendition of “(What’s So Funny ‘Bout) Peace, Love & Understanding?”

After the opening shot of Scarlett Johansson’s shapely derriere is seen in a close-up wearing pink undies, Bill Murray (“Hamlet”/Razor’s Edge/”Rushmore”) makes his grand entrance in the Hyatt. When “The Man” enters the film, it is all his. Murray shows for perhaps the first time that he can be the lead in a film and hold it together by not only being funny but by being touching, as in his other roles he was never asked to carry a film as much as he is here. This is his film, as Ms. Coppola wrote it with him in mind and he takes that part and turns in one hell of a dazzling performance. He keeps his comedy in check, as he wisely knows he can ruin his character’s credibility by being too bold and going for a quick SNL type of comedy fix. He’s so good in this role, that a nomination for an Oscar should be forthcoming.

The petite Ms. Coppola is a quiet but determined young lady. She knows what she wants in her film, and perseveres until she gets it. In a recent interview in Indiewire she said “I wanted to make a love story without being nerdy.” This film goes back in mood and style to the 1940s and reminds me most of those Bogie films, as it had the same kind of innocent romantic feelings as those Hollywood classics.

LIFE BEFORE THIS, THE