LORD OF THE JUNGLE

Ford Beebe(“Challenge to be Free”/”Invisible Man’s Revenge”/”Trouble at Midnight”) directs and writes the mediocre jungle story. It’s based on the characters of Roy Rockwood. This is the final entry in the below average “Bomba the Jungle Boy” series that started in 1949. It’s junior varsity Tarzan. Bomba is again played by the 24-year-old Englishman Johnny Sheffield.

Spoiled rich girl Mona (Nancy Hale) flies in from her beloved England to visit her Uncle Andy Barnes (Leonard Mudie), the Deputy Commissioner at Laghaso Station, Africa. She wants to see Africa and talk with her uncle about the spat she had with her doctor fiancé. He wishes to come to Africa to serve as a missionary doctor, while she doesn’t want to leave England. The main story revolves around a hundred rogue elephants stampeding the local jungle villages and killing the natives. The Nairobi government sends three hunters (Wayne Morris Morris, Paul Picerni, and Bill Phipps) to wipe out the rogue herd. Bomba, a friend to the elephants, insists it’s only one rogue elephant, Raju, who is responsible and he will eliminate that bull. The adamant white hunters refuse to believe him and act stupidly until in the climax we learn Bomba was right. The jungle then returns to being a movie-set safe jungle when Raju is taken care of. It’s filmed in b/w. 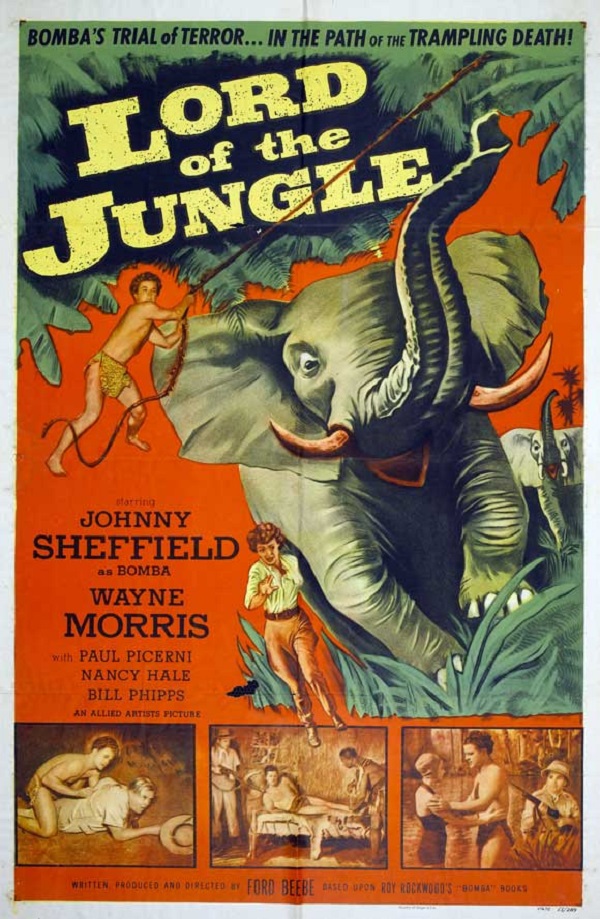