The only film directed by the actor Paul Frees (voice in Rocky & Bullwinkle) is a shrill take on small-time thugs here mistakenly called beatniks (the film has no actual beatniks, but a lot of punks). It’s one of those “troubled teen” exploitation dramas from the late 1950s that remains bad no matter how you might try to excuse it. The acting is atrocious, the music is unbearable and the screenplay written bt Frees and Arthur Julian is hard to stomach. All the characters are either nasty, obnoxious or unreal. Take your pick, but not one of them is worth caring a lick about.

Gang leader Eddy Crane (Tony Travis), his girlfriend Iris (Karen Kadler), the psychopathic Bob “Mooney” Moon (Peter Breck), Chuck (Bob Wells) and Red (Sam Edwards) terrorize their suburban California community with armed robberies while wearing rubber masks. In the opening scene they rob a convenience store they love to knock over every few weeks and after making their getaway in Iris’s car end up in the diner owned by Iris’s mom Nadine (Martha Wentworth). The punks bang into the polite and kindhearted LA talent agent Harry Bayliss’s (Charles Delaney) disabled car and laugh it up over their tough guy antics inside the diner, as Iris gets Eddy to sing (a dreadful love ballad he lip-syncs). Bayliss is impressed with his voice and invites the obnoxious Eddy to come to his office for an audition for a TV program. Eddy gets the job and Helen (Joyce Terry), Bayliss’s secretary, arranges for a hotel room for Eddy and the gang to stay in town. Before you know it Eddy and Helen are lovebirds, and his future suddenly looks bright. But the gang wouldn’t let Eddy break from them and he’s stuck with them even after his successful TV appearance. After a night of boozing and partying, Mooney fatally shoots the bartender Gus and the group goes on the lam. But Eddy decides to keep his date with the recording session and it leads to a confrontation with a crazed Mooney, as the police close in and arrest both–shattering the aspiring singer’s dreams. 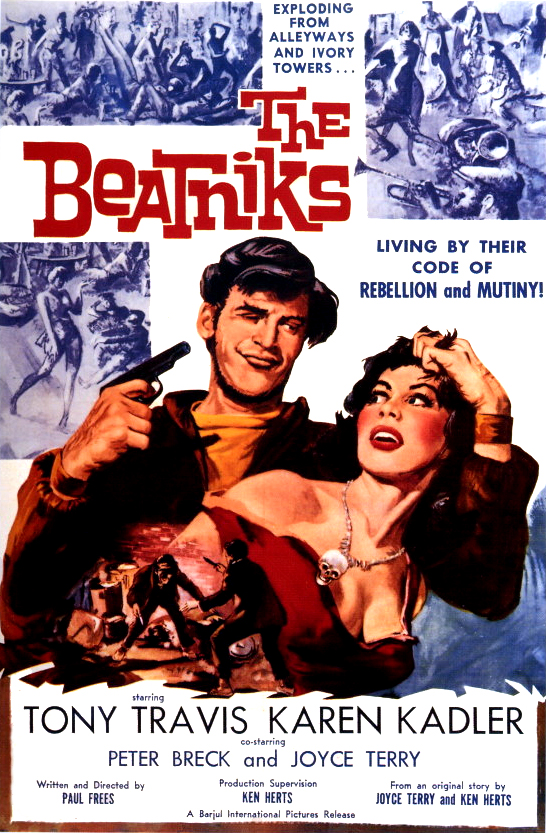