John Huston (“The Kremlin Letter”/”The Maltese Falcon”/”Freud”) directs this reasonably entertaining old-fashioned creaky whodunit that uses a villain, ably played by Kirk Douglas, in many disguises to mask his killing spree. Set in an England of fog, fox-hunts and characters formally dressed for drawing-room teas, it’s very Victorian except for it taking place in contemporary times. It’s taken from the novel by Philip MacDonald and written by Anthony Veiller. There’s also the gimmicky cameos of Mitchum, Lancaster, Curtis and Sinatra, who are seen gleefully taking off their masks at the end credits after playing minor characters.

The plot has famous writer Adrian Messenger (John Merivale) at the fox-hunt of the haughty Marquis of Gleneyre (Clive Brook) asking as a personal favor that Anthony Gethryn (George C. Scott), an MI5 friend, to on the quiet check out the addresses of the eleven names he’s listed without questioning why. On a flight to Canada, Messenger’s plane is sabotaged by a bomb placed by the killer disguised as the Vicar Atlee. Adrian perishes, but not before telling fellow passenger Raoul Le Borg (Jacques Roux), a survivor, some important dying last words about his list.

It turns out the Frenchman Raoul worked together during the war with Gethryn, a colonel in the British army, but the two intelligence offers never met and only know each other through their code names. They decide to work together tracking down the list, as Scotland Yard chief Sir Wilfrid Lucas (Herbert Marshall) orders Inspector Pike (Bernard Archard) to help. They soon discover all eleven died accidentally, and discover further that Adrian was actually meant to be the twelfth man on the list.

After good sleuthing the trio uncover that everyone on the list had been held during WWII as POWs in the same Burmese stockade and that the killer was a fellow POW, a Canadian named George Brougham (Kirk Douglas), who betrayed them as an informer during an attempted prison escape and suddenly is afraid his name will go public and kills them to eliminate the possibility of them identifying him as this vile character.

It comes to a climax during a fox-hunt on the Marquis’s country estate, where his 12-year-old grandson Derrick (Walter Anthony Huston) is in danger over his inheritance when Brougham shows up as the son of the Marquis’s deceased brother he hasn’t seen for ages. Derrick’s widowed mother, Lady Jocelyn Bruttenholm (Dana Wynter), cuts a striking figure as the romantic interest of the forward French bachelor. The film was relatively interesting until the killer shows his face without a disguise and the resolution through a “drag hunt” is only routinely accomplished, though with much flourish and conviction. 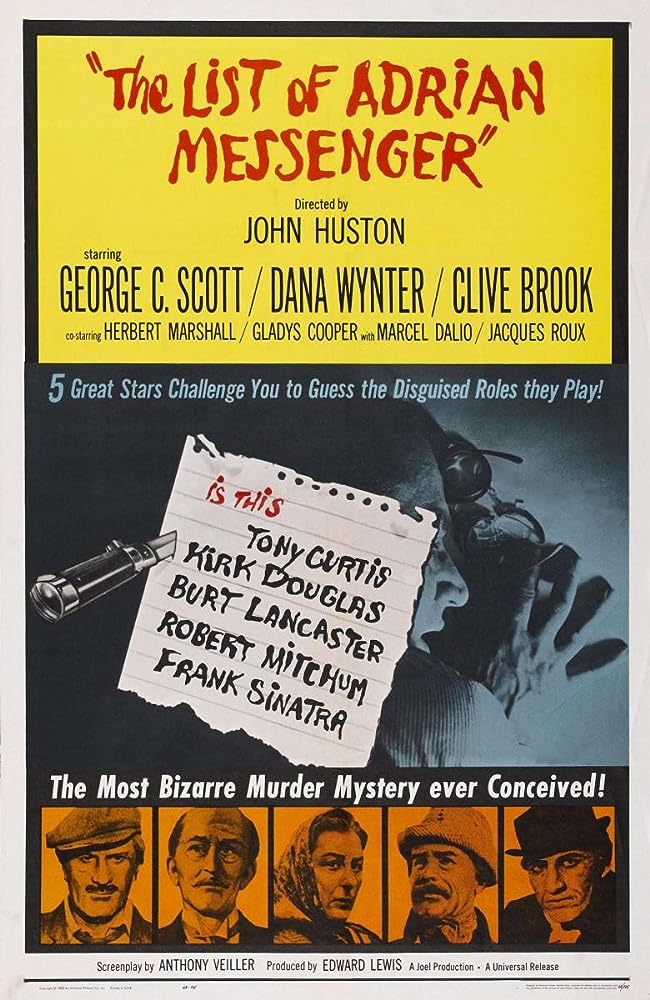