Playwright, screenwriter, and satirist George Axelrod (“The Secret Life of an American Wife”) directorial debut is co-written with him and Larry H. Johnson; the sharply subversive but uneven (it unravels in the second half) high school rock ‘n’ roll set kooky satire is based on Al Hine’s novel lampooning Southern California’s youth culture. It’s also a poisonous love letter to the movie business that supported the director in style all these years.

Alan Musgrave, who calls himself Mollymauk after a duck-like bird thought to be extinct but isn’t, is a brilliant but eccentric and deranged student at Los Angeles’ new Consolidated High School. From his prison cell in the psychiatric ward of a prison, Alan tells his story from the past year into a tape recorder to explain why he committed murder.

The quacking like a duck Alan and the vain, vacuous and ambitious but stunningly beautiful Barbara Ann Greene (Tuesday Weld) are both senior transfer students at the ultra-modern LA high school. Alan puts the pretty cheerleader under a hypnotic spell and learns her chief desire is to be popular. They make a pact whereby he promises to get her whatever she wants without demanding anything in return. He starts by showing her how to get 12 cashmere sweaters needed to join an exclusive sorority by playing up to her guilt-ridden divorced father (Max Showalter). He finds a way to get her to pass a botany course by using her sex appeal on the horny principal (Harvey Korman) and getting a cushy job as his secretary. After she meets the wealthy straight-laced college senior Bob Barnard (Martin West) during a sex seminar on petting at a drive-in church, Mollymauk arranges for them to meet at a beach excursion to Balboa. Bob’s eccentric widowed mother Stella (Ruth Gordon), whose psychiatrist hubby died from a psychosomatic attack, objects to their marriage when she learns that Barbara Ann’s mother Marie (Lola Albright) is a floozy fortyish cocktail waitress. Regretting that she ruined her daughter’s chance to better herself socially, Marie commits suicide. Bob graduates college to become a marriage counselor and marries the sexy nymphet despite mom. Barbara Ann also met at Balboa the popular schlock movie producer of bikini beach flicks, T. Harrison Belmont (Martin Gabel), and he recruits her for his next mindless beach film. When hubby after a month’s marriage tries to prevent Barbara Ann’s wish for fame and fortune as a movie star, she wants out of the marriage. Alan tells Barbara Ann that Bob’s family doesn’t believe in divorce, marriages are ended only by burial. During the high school graduation ceremony, Alan chases Bob with a bulldozer, disposing of him and everyone else on the speaker’s platform. He confesses to a brainless-addicted TV public that he might have done it for love of Barbara Ann.

Its sardonic, irreverent brand of humor proved a hit with certain filmgoers and it has now become a cult favorite. 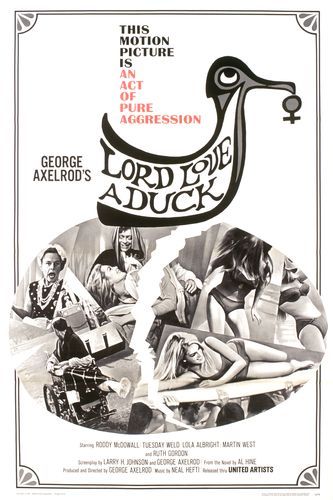