Not as bad as it seems, nor as good as it aspires to be. Anglo-Pakistani writer-director Hanif Kureishi, the playwright and novelist who wrote the screenplays for “My Beautiful Laundrette” and “Sammy and Rosie Get Laid,” comes up with a mixed blessing in his directorial debut that might satisfy as much as dismay no matter how sympathetic the viewer is to the loser protagonists. The colorful lost souls in the slice-of-life street drama about a bunch of hapless small-time drug dealers comprising a subculture in the Notting Hill section of London loses its way at times and at other times has its finger on the pulse of contemporary life for the homeless it depicts. The uneven ride plods along slowly losing credibility the more it fails to make the negative characters seem like we should care about them and with the shapeless story eventually coming apart due to a string of unconvincing incidents. Yet Kureishi shows unconditional love for the disaffected youth, as his alter ego might be an Indian yoga teacher (Roshan Seth) who is the loving neighbor in the movie giving his sandals to a screwed-up youth in need. The band of hustlers are not overly violent, but are hard to love since they are thieves, depraved addicts, needy without caring about others and untrustworthy. The most unlikely one of them will be given a chance to succeed and to extricate himself from being a deadweight in society, which provides the rooting interest and human side of this supposed ironical comedy (at least it appears to be a comedy).

The band of street people who call themselves “the posse,” are led by the ambitious 20-year-old hustler named Muffdiver (Steven Mackintosh). His best friend, a school chum from their country days, is the unemployed drug pusher Clint Eastwood (Justin Chadwick). In one of the early scenes he receives a thrashing from creditors and is stripped naked on his 20th birthday. Clint thereby decides to go straight. Promised a job as a waiter in the local upscale trendy diner by the unbelievably kind-hearted manager Mr. Hemingway (Brad Dourif) if he can only secure in a few days a pair of clean and decent shoes (his pair was stolen in the beating and he showed up for his interview with a vile pair of boots taken in the garbage). The third significant person in the drama is Sylvie (Emer McCourt). She’s just arrived from a rehab stint but is still uncured of her smack habit. Sylvie’s an old friend of Clint’s and has caught the fancy of Muffdiver, causing friction between the boys. That she ends up being Muffdiver’s squeeze but is not that bashful that she wouldn’t be in a bathtub with both boys at the same time, tells us all we care to know about the good-hearted junkie but not enough about the boys.

The gist of the film has Clint obsessed to get a pair of shoes anyway he can except by buying them, as he begs, tries to borrow and then steal a pair. It comes down to the last minute if he’ll get the shoes in time to get the job and a new start in life (if you believe), as he gets distracted over a number of things that include breaking into someone’s well-furnished vacant apartment. This results in Muffdiver moving the posse in as squatters. The dandy top hat wearing amateur magician Muffdiver hopes this address will move him up in status as a drug pusher, and give him new business handling designer drugs with the more together local drug dealer Mr. G. While still trying to obtain shoes with no luck, Clint also has to deal with a variety of customers, the posse members (failed musician Tom Tom, failed middle-aged electrician Burns and the bike carrying indoors and outdoors Indian lad named Bike), a visit in the country to see his estranged mum and his love for Sylvie.

The film is better acted than it is directed, as the novice director just doesn’t have the techniques to put it all together so it coheres. The whole druggie scene just never comes across as authentic, something that’s essential to make things fly. Nevertheless Kureishi has good intentions, even if the self-pitying characters are superficial and cannot be made lovable despite the director’s all out effort to make such misguided anti-social types endearing and to show that they are only troubled youth going through a passing phase. Now Kureishi might have other intentions about what to make of this drug scene other than finding it harmless and funny, but they are not made clear. It’s also troubling that Kureishi’s inability to make his dullard junkies he goes to great lengths to humanize seem as anything more than bores and parasites, makes things along Portobello Road not as interesting as they could have been. 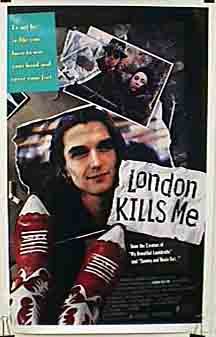