“A psychological drama about a woman with a dark secret from her childhood.”

A psychological drama about a woman with a dark secret from her childhood that is carried over to her adult life. It’s a post-war baroque melodrama, creaky as wooden steps in a mildewed house. It’s from the German émigré director, John Brahm (“Hangover Square”/”The Lodger”/”The Brasher Doubloon”), who gives this genre a decidedly European flavor. “The Locket” has something to say about a person with a severe personality disorder needing the proper psychological therapy.

It was too wooden a presentation to generate anything but a few sparks. It tells the story unconventionally by flashbacks within flashbacks from the viewpoint only of the male lovers who were deceived by the pert heroine, Nancy Blair (Laraine Day).

The wealthy John Willis (Gene Raymond) is a happy man, who is today about to marry the charming Nancy Patton (an alias last name for the Laraine Day character). He seems to be very content with his choice of bride, even though he doesn’t know much about her and his parents haven’t met her until now. John is suddenly confronted by a stranger bursting into his house who identifies himself as Dr. Blair (Aherne), a psychoanalyst and Nancy’s former husband. That surprises him. She never told him that she was married before. Blair tells the startled John that he has something urgent to tell him about Nancy and warns him not to be fooled by her amiable exterior, she is a sick woman with a history of kleptomania and will ruin him like she did her other lovers. He tells him to stop the marriage before it is too late.

Dr. Blair tells him about a portrait artist in New York, Norman Clyde (Mitchum), who almost married her. The flashbacks within the flashbacks begin here. This is early Mitchum before he reached stardom; it’s one of the few performances I thought he was awful in. He plays an angry bohemian artist, overly concerned with the integrity of his work, who meets Nancy when she came to him as an art pupil on the insistence of her boss, Mr. Bonner (Cortez). She was his secretary and he an avid art patron. Clyde is invited to show his art collection at a gathering Bonner is having for his wealthy acquaintances. To Clyde’s dismay, he discovers in Nancy’s purse a bracelet stolen at the party. He makes her mail it anonymously back to the guest she stole it from and gets her to tell him about her childhood. She tells him that her mother was a housekeeper for a wealthy woman, Mrs. Willis (Emery), and that when she was 10-years-old, she was friends with that lady’s daughter, Karen. On Karen’s birthday, Mrs. Willis refuses to let the servant’s child attend the party but Karen gives Nancy a locket as a present, anyway. When the mother finds out what Karen did she retrieves the necklace, which unknown to the little girls is actually a diamond locket. This action disappoints Nancy. Later the locket is reported stolen and Nancy is accused of taking it and even though she is innocent, she gets blamed for something she didn’t do. The locket is retrieved when Nancy’s mother finds it in Karen’s dress, but Nancy’s mother is fired anyway. This event turns out to be the critical one in Nancy’s life, as she vows that if God somehow gives her the locket — she will never ask him for anything else again.

Invited again to a Bonner shindig, Nancy disappears upstairs. Clyde suspects Bonner and Nancy of being secret lovers, and will quietly follow her upstairs. A gunshot comes from Bonner’s room and Nancy emerges, but she is sneaked back into the party by Clyde. The valet who found Bonner’s body is eventually charged with the murder. But Clyde doesn’t believe her explanation and their romance breaks up.

When Clyde finds out that Blair eloped with her in Miami and now lives with her in New York, he goes to his workplace to warn him about the femme fatale; but, Blair refused to believe him. In a scene that was impossible to fathom, Clyde becomes so upset that he couldn’t get Blair to go to the district attorney and stop the execution of an innocent man, that he jumps to his death from the office window of Blair’s workplace.

Blair says he didn’t believe Clyde’s story until the couple went to England during the war, and he found out for himself that his wife stole jewelry from Lord Wyndham’s wife. As an added bit of melodramatics, Blair cracked up over this and was institutionalized and only recently was released.

Warning: spoilers in next two paragraphs.

John is not impressed with the story and the wedding precedes. Before the wedding ceremony Mrs. Willis gives her daughter-in-law, whom she doesn’t recognize as being her former servant girl, the locket she wanted as a child, telling her the owner of the locket, Karen, has died. But when walking down the aisle the bride’s repressed memories come hauntingly back, and she has a nervous breakdown and is carted off to the loony bin.

It’s a somber story, with a lot of heavy-handed things going on. The complexities of the heroine’s character were well presented. The analyst’s comments about her stealing to get even with Mrs. Willis seemed to be a reasonable explanation, if taken at face value. But that doesn’t answer Nancy’s ability to murder or her indifference to men while pretending to like them. Nancy’s revenge is shown to be complete when she is about to marry the son of the woman who accused her of the theft.

“The locket” only had some glitter but not enough substance. Though, as muddled as it was, it still kept me alert wanting to know what gives. The problem is I never satisfactorily found out what gives. 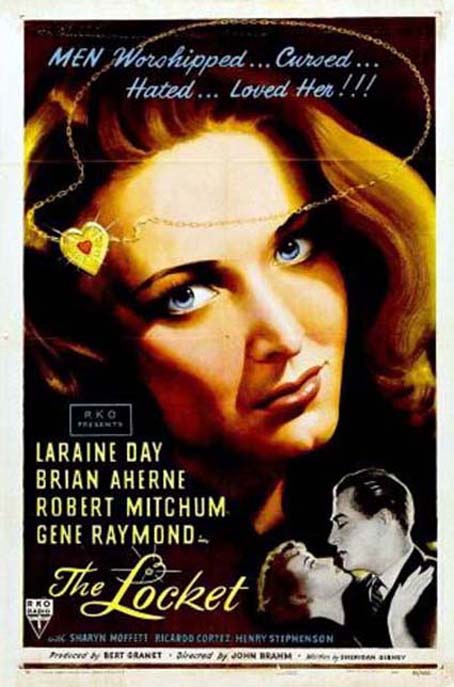