Dreadful early talkie directed by George Fitzmaurice (“Lilac Time”/”Vacation from Love”/”The Dark Angel”) that doesn’t hold up to today’s standards of filming (the sound quality was just awful). It marks the 21-year-old Barbara Stanwyck’s Hollywood film debut, at least in a talkie (she had a tiny role in a forgettable film called Broadway Nights- 1927). The film is based on the 1919 play “The Sign on the Door” by Channing Pollock and is written by C. Gardner Sullivan, George Scarborough and Earle Browne.

It’s set during the Prohibition era. Wealthy disreputable playboy Frank Devereaux (Rod La Rocque) and the staid working-class gal Ann Carter (Barbara Stanwyck), his businessman father’s pretty secretary, are on a date in an illegal floating cabaret just outside the city limits. Dining in a private room, Frank puts some heavy moves on Ann and when she rebuffs him and tries to leave finds the door locked. Soon the club is raided by police when it drifts too close to shore and their picture is taken by a newspaper photographer, but Frank buys the negative for a $100 to avoid a scandal. The story picks up 18 months later and Ann is happily married to her new boss, a prominent lawyer named Larry Reagan (William Boyd). He has a magnificent home in Portchester, New York, and a swell kid sister, Helen (Betty Bronson), whom he absolutely adores. Wouldn’t you know it, but Frank shows up in their mansion and announces he’s dating Helen. Larry hates Frank because he had an affair with the wife of Colonel Dixon, his best friend. But the inexperienced Helen is in love with the womanizer and is going to secretly see Frank in his hotel that evening for dinner and plans to sail with him in the morning to Hawaii, even though she was warned by Ann not to see the cad again. Ann goes to the hotel to warn Frank to keep his dirty mitts off her innocent sister-in-law, but can’t get through to him as he waves the photograph of him and Ann during the raid and threatens to expose their notorious night together to her jealous hubby. Also seeing Frank is Larry, which causes Ann to hide in a locked room. Frank and Larry get into a confrontation, and Frank is accidentally shot. When the police arrive, they find that Ann is locked in the room with the body. Rather than have her hubby take the rap, Ann confesses to the shooting. Then the honorable Larry confesses. Finally, on his deathbed, Frank shows he’s not such a bad egg and clears everyone of the crime before croaking.

The melodrama suffers from the static, stage-like look of early sound movies; it was a time when how to use sound was first being developed and still had many kinks to be worked out. Decades later when Stanwyck became a Hollywood legend, she was asked about The Locked Door and quipped: “They never should’ve unlocked the damned thing.” 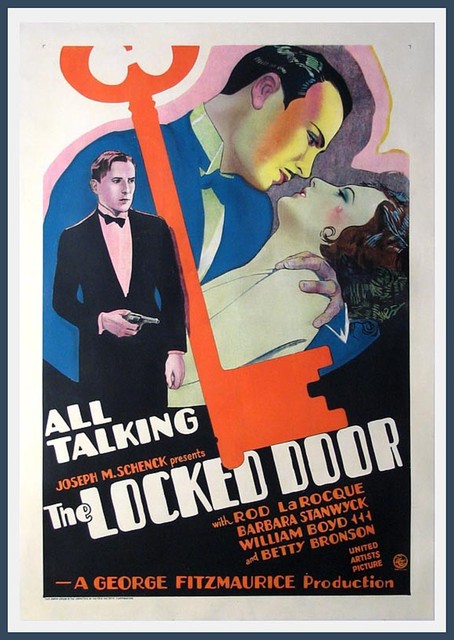