“Penn seems to have little feel for the Western genre, but despite that the amazing thing is that this mock epic Western came out as well as it did.”

Arthur Penn (“The Left Handed Gun”/”The Chase”/”Bonnie and Clyde”) directs this goofy, facile, heavy-handed, funny, unconventional and crudely realized revisionist Western, meant to debunk the frontier myths and rather successfully compares the Washita River Massacre of 1868 with the My Lai massacre in Vietnam. It’s based on the novel by Thomas Berger and is ambiguously written as to the facts by Calder Willingham, who does an injustice to the author’s much truer characterization of the Cheyenne by trivializing most into being the same Indians you would see in a Ford mainstream movie like Cheyenne Autumn (the exception being the casting of the charismatic Chief Dan George, as for the first time in a major role in a big budget film a real Indian gets to play one).

Overall the gimmicky film has a phony look to it as Penn seems to have little feel for the Western genre, but despite that the amazing thing is that this mock epic Western came out as well as it did. You can credit that to the effortless acting and, also, there’s a lot of meat in all those vignettes that offer social criticism against Native American genocide, religious and sexual hypocrisy, and the stupidity of revenge.

It’s framed as a fictional biopic, as it allows the 121-year-old tall tale storyteller, Jack Crabb (Dustin Hoffman), the sole white survivor of Custer’s Last Stand at Little Big Horn, to tell in flashback his story to a skeptical historian (William Hickey) about being raised by Cheyenne and then by a Christian family after his pioneer parents were killed by Pawnees while crossing the Great Plains when he was ten.

Crabb was raised by Old Lodge Skins (Chief Dan George), who provided him with wise fatherly guidance and refers to his people as the “Human Beings” because they were at one with nature. When the Cheyenne attack some troops in retaliation for their massacre of a peaceful Indian village, Crabb, who was given the Indian name of Little Big Man, goes over to the cavalry. The young man is now raised by a stern preacher Pendrake and his lustful wife (Faye Dunaway), and he learns to adapt to white ways.

The film presents a number of long drawn out sketches of the colorful Crabb’s adventurous life: his becoming an assistant to snakeoil peddler Allardyce T. Merriweather (Martin Balsam); a less-than-successful gunfighter known as the Soda Pop Kid; a friend of Wild Bill Hickok (Jeff Corey); a recluse; marrying the Swedish gal Olga (Kelly Jean Peters); opening a haberdashery and then cheated out of the business by his venal partners; joining the buffoonish Gen. George Armstrong Custer’s (Richard Mulligan) U. S. Cavalry unit as a scout in order to search for his wife Olga, who was abducted by Indians; deserting during a savage attack on the village where he once lived and meeting there an Indian woman named Sunshine (Aimee Eccles) who leads him to a reservation headed by Old Lodge Skins, who is now blind; discovering Olga living nearby with his former foe Younger Bear; Custer attacks again another defenseless Indian village that has only Crabb and Old Lodge Skins surviving; Crabb becomes a self-pitying drunk until he meets Hickok again, who straightens him out; Crabb joins Custer as a scout, seeking revenge, and survives the battle at Little Big Horn, as the Cheyenne destroy all the troops but Younger Bear recognizes him and brings him to safety in the tent of Old Lodge Skins.

The chameleon perpetual adolescent character played by Hoffman has its appealing moments, but the film is stolen by the nonchalant Chief Dan George spouting wisdom and mixing in a stand-up comic routine and dishing out ladles of humanity. There’s also a counterculture take on an effeminate homosexual named Little Horse, who is allowed to be himself by the Cheyenne and is even cherished by the chief. Penn’s film went on to become one of the highest grossing Westerns of all time. 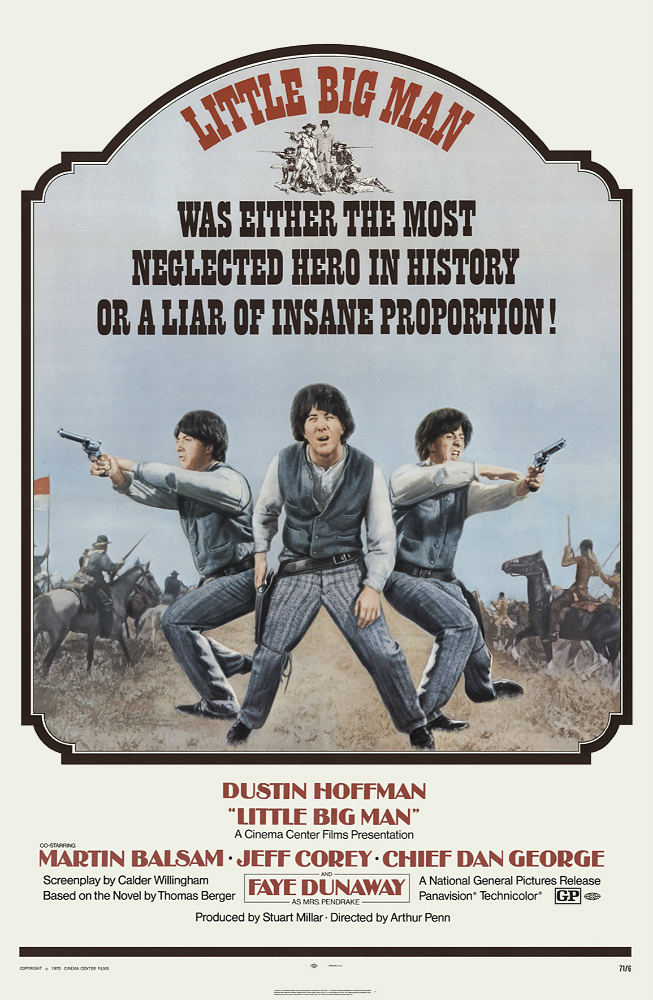