Rainer Werner Fassbinder’s fully realized emotionally draining but restrained melodrama was shot for German television. It’s set in postwar Germany and tells about the decline of a character who was once filled with dreams and hopes, but those closest to him pull him down into an irrelevant person and he succumbs when he can’t help himself anymore.

The story picks up with Hans Epp (Hans Hirschmuller) as a fruit peddler calling out his products in the street while accompanied by his nagging wife Irmgard (Irm Hermann). He makes a sale to an attractive married woman (Ingrid Caven) in an apartment building who asks him to deliver the pears in person and invites him in, but he refuses saying some other time. When the suspicious wife questions why it took so long, he runs away to the nearest bar and fortifies himself with a double shot of whiskey. Overworked and disappointed with his choices in career and wife, he loses his head one day after one nagging too many and while in a drunken stupor beats his wife in front of their sweet daughter Renate (Andrea Schober). When his wife leaves him, he begs her to return as she confides her fear of him to his consoling mother. They reconcile but soon he has a heart attack and becomes too ill to work and they hire a helper, Hans’ old pal and drinking buddy from his legionnaire days, who saved his life back in Morocco in 1947, Harry (Klaus Löwitsch). Harry proves to be an industrious worker who now takes a cart through the streets while Hans sulks with too much time on his hands. The business grows, but Hans goes into a depressing funk and steadily declines indicating he no longer wishes to live. Harry, in the meantime, bonds with both his wife and daughter, and takes his place as the family bread winner. When Hans drops dead after a drinking bout at his hangout bar with his old gang, Harry weds Irmgard and takes up the life that was meant for Hans.

We learn that Hans’ contemptuous bourgeois mother (Gusti Kreissl) always considered him a good-for-nothing and treated him with disdain, as she favors her obedient married daughter Heide (Heide Simon) and tolerates her outspoken studious college student daughter Anna (Hanna Schygulla)–the only one in the family sympathetic to him. Hans once dreamed of being an engineer but was driven to escape his cold family by joining the Foreign Legion. He was content on his return in being a good policeman but let his guard down bringing into the station for questioning a suspect (Elga Sorbas) he was attracted to, who gave him a blow job as his superior officer entered the room and as a result he was canned.

The film’s most telling scene is at the family dinner party, where Hans stands out from the others as a lost soul who is on a self-perpetuating downer.

The ensemble cast from Fassbinder’s regular stock company perform with great merit this formal theatrical piece. It’s a bleak tale that is highly critical of the middle-class and how a heartless matriarch and unsuitable wife can emasculate a man with so many nagging doubts about his worth. The short and stocky Hans can be so eviscerated by the system (capitalism), the hypocritical German society and his personal relations that he deems death as his only chance of escaping from such mental suffering, deterioration of the soul and humiliation. 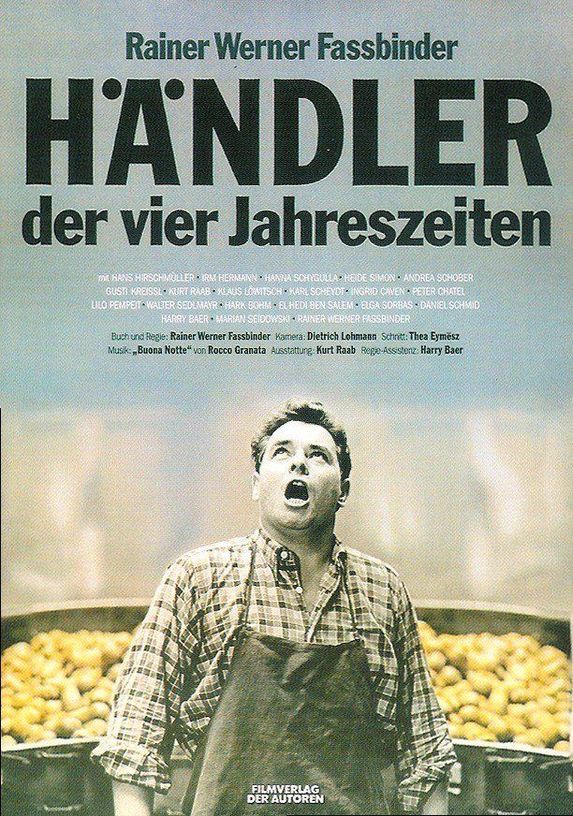