LIMITS OF CONTROL, THE

Jim Jarmusch (“Dead Man”/Mystery Train”/”Down By Law”) took the title from a 1975 essay by William S. Burroughs for this nondramatic comedy-drama, a plotless film not suitable for all tastes. The great indie American director of abstract films creates a strange stylistic character study of a hitman operating under mysterious circumstance in exotic and barren locales in Spain (there’s the Madrid airport and the Reina Sofía museum). The director has said his film is an homage to John Boorman’s 1967 crime thriller ‘Point Blank.’ It’s lyrically shot by cinematographer Christopher Doyle. It sets its artistic agenda as it opens with a Rimbaud quotation.

Jarmusch’s snazzy dressed lone man protagonist (Isaach De Bankolé, Frech/African actor) is all about his mission, as the hitman rides by train through different spots in Spain to make contact with those who will give him further cryptic instructions in small match boxes. After reading the message, he swallows the paper and moves onto the next stop where he’ll receive a new message. The journey takes him to Madrid, Seville and the rural countryside, where the tight-lipped assassin follows the same routine at each stopover–doing tai chi exercises, drinking two espressos in separate cups, and again nodding to his contact that he acknowledges the password “You don’t speak Spanish, right?”–which becomes the film’s running gag.

Some of those the hitman meets in his travels are the following: at the Madrid airport a menacing man known as Creole (Alex Descas, French actor) and his playful partner (Jean-François Stévenin), who translates the orders in English; a nude lady (Paz de la Huerta) in his hotel room, whom he refuses to have sex with because he never has sex on the job; a blonde Brit (Tilda Swinton) carrying a clear umbrella, wearing a trench-coat and a Stetson, who talks films; a scraggy philosophical man with a guitar (John Hurt), who talks about bohemians; an Oriental lady (Youki Kudoh) on a train intensely talking about molecules; a Mexican cowboy (Gael García Bernal) in a forsaken town in the sticks, who has a bumper sticker reading “Life is worthless;” and an Ugly American (Bill Murray), who is in a secure bunker (Cheney not Hitler?) and is the aged evil doer the hitman is assigned to kill.

The intent of the slow-moving film remains an enigma (maybe it’s closest to being a Buddhist meditation on the dangers of those obsessed with power), but it’s beautifully wrapped in art, philosophical musings, mystery and film lore. Some of the quotes say things like “Everything is subjective,” “Reality is arbitrary” and “He who thinks he’s bigger than the rest, must go to the cemetery. There he will really see what life is like.” 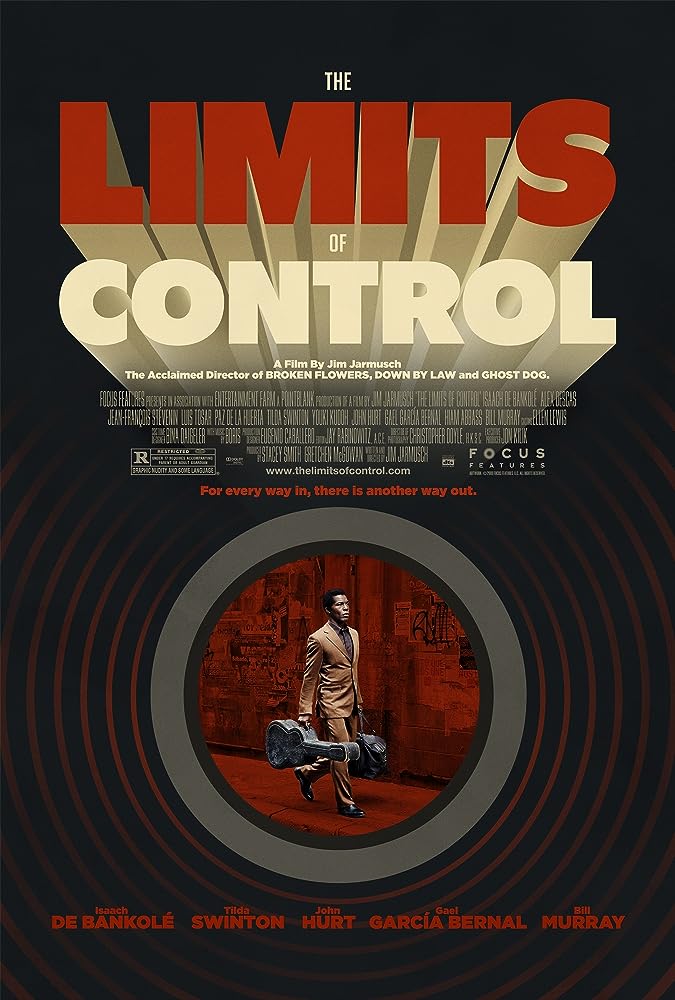