This Rainer Werner Fassbinder international coproduction was shot in English, in color, and with a big-budget, but though acclaimed by many critics and fully-realized as historical melodrama it didn’t do well at the box office. It’s faithful to Lale Andersen’s novel The Sky Has Many Colors. It describes in a Fassbinder ironic way the period of the Third Reich as a predictable development of German history that was staged as spectacle supported by hate and manages to tell a heart-breaking love story between a Swiss Jewish composer, Robert Mendelsson (Giancarlo Giannini), whose father David (Mel Ferrer) is a millionaire businessman with connections, and an ambitious German-Aryan Zurich cabaret singer named Willie (Hanna Schygulla). The film is built around one song, “Lili Marleen”, that’s lifted from a WWI record (a real song that’s fictionalized for this film) and the new lyrics penned by Robert as a valentine for his Willie. When Robert’s father objects to the romance because she’s German and can’t be trusted, he fixes it so she can’t return to Switzerland after a business trip to Germany with Robert. In Germany, she hooks up with a high ranking Nazi officer Henkel (Karl Heinz von Hassel), an old admirer from Zurich, and is determined not only to survive but to be an artist in the Third Reich without being a collaborator. The song catches on and she becomes the most famous singer in Germany, especially with the troops, and the darling of the top brass in the Nazi regime. The love affair with Robert becomes so successful because it’s never consummated, as Robert remains in Switzerland working for a Jewish freedom group to help Jews escape Germany while Willie, after Henkel uses his connections to get her the initial break, makes the most of it and breaks Robert’s heart by turning his sad love song into an inspiration for the Nazi troops.

Filmed curiously with a morbid nostalgia for swastikas, showbiz glitz and as a cloak-and-dagger romance, it has fun showing that even though Willie can’t sing she sings the song umpteen times and that has the strange effect of making it sound weirdly beautiful after being heard for so many times. When Willie’s Jewish lover is jailed as he pops up in Berlin and foolishly sees her while taking care of some resistance business, the song is used as a means of torturing him in his cell as he has to hear it played over and over again on record.

It’s the kind of love story Hollywood wishes it could make in its more serious and testy moments.

What keeps it whack is all the kitsch and usual Fassbinder hysterics thrown into the mix, which those Hollywood types would never risk trying just for a new way to look at something old or as a possible means for a bright idea. But for those who like their films intelligent, edgy and unpredictable, the antics here should be no problem to stop them from enjoying this intriguing and necessary film. 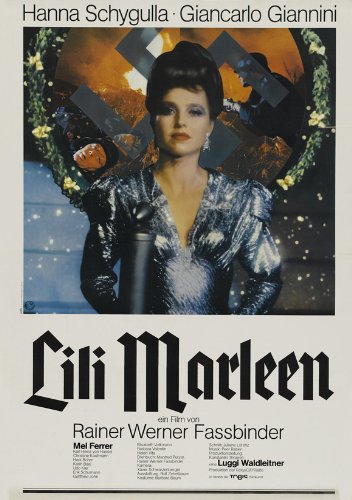