Delmer Daves (“The Red House”/”Pride of the Marines”/”Destination Tokyo”)directs this unconvincing World War II tale that mixes war and a soap opera war romance. It’s based on the novel by Joe David Brown and is written by Merle Miller. Monterey County, California fills in for Southern France.

Gruff Lt. Sam Loggins (Frank Sinatra) is part of the United State’s 7th Army attempting to remove the German occupiers from the hills of southern France in 1944, during the late stages ofWorld War II. Cpl. Britt Harris (Tony Curtis) is the new replacement radio operator. He’s a cocky, smooth talking, college-educated, wealthy kid, whose dad owns a number of textile mills. When not fighting the Germans, the troops get passes to go to Nice. There Sam meets the lovely 19-year-old Monique Blair (Natalie Wood), an American who lived all her life in France to get away from America’s racial prejudice. After putting Sam off for several weekends, Monique tells him that her deceased father was a Negro. Monique does not expect to see Sam again, but he calls on her after a few weeks pass after mulling things over. One night while out on the town, they run into Britt. At a jazz club in Nice, Britt performs a stirring trumpet solo with Red Norvo’s band (with Pete Candoli subbing on the horn for Britt) and impresses the wide-eyed Monique. The mulatto feels she has more in common with the sophisticated Britt and she falls in love, to the chagrin of Sam.

When Britt changes his mind about the marriage application, saying he only went out with her for kicks, Sam forces him to reveal himself as a racist to Monique and her mother (Leora Dana). The two soldiers then go on a dangerous mission to overtake a German-held village and as they run to escape explosions, Britt is killed by a German soldier and Sam loses an arm. After seven months in a French hospital, Sam vows to return to his construction business in Los Angeles. But before he leaves he visits Monique, whose mom died and she has turned her villa into a school for the war orphans.

There’s a timely message about racism, but the melodrama itself is mediocre fare. 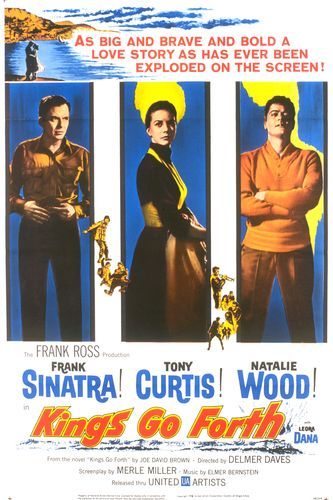