IMMORTAL BATTALION, THE (THE WAY AHEAD)

“A rousing flag-waving war drama about the British Army, that was shot during the war and grew out of being a training film.”

A rousing flag-waving war drama about the British Army, that was shot during the war and originated as a training film. The story is by Eric Ambler and is written by Ambler and Peter Ustinov. Director Carol Reed (“Bank Holiday”/”Odd Man Out”/”The Third Man”) focuses on a group of ordinary civilian recruits (salesman, office manager, plumber and fireman), who undergo a rigorous basic training under no-nonsense veteran Sergeant Fletcher (William Hartnell). The officer in charge is nice guy Lt. Jim Perry (David Niven), a car mechanic in civilian life promoted through the ranks, who realizes that he must back his tough-minded sergeant so these quarrelsome recruits would get a good training for combat. It leadsto the recruits setting sail for their first battle experience, as they land in North Africa and feel combat ready to go up against the enemy.

It’s shot in a semi-documentary style, which keeps it realistic.It has a warm charm and a mild sense of humor, that makes it an easy film to like.The Immortal Battalion was released in London on D-day. 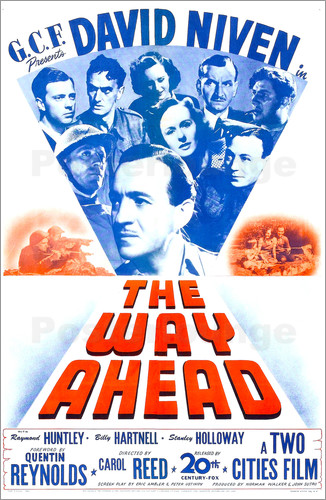