LIFE OF EMILE ZOLA, THE

This major box-office hit won three Oscars for Best Picture, Best Screenplay and Best Supporting Actor (Joseph Schildkraut). The fictionalized biopic is loosely based on the book Zola and His Time by Matthew Josephson and is directed by William Dieterle (“The Story of Louis Pasteur”/”Juarez”/”Dr. Ehrlich’s Magic Bullet”). The Hollywood pic, set in the last half of the 19th-century, about the French activist author Emile Zola (Paul Muni) is serious, stodgy, somewhat inaccurate (what the studio calls taking dramatic license; but the period details and the history remains faithful), uninvolving and mostly a piece of pap.

It opens in Paris with struggling writer Emile Zola and his artist garret roommate Cezanne (Vladimir Sokoloil) trying to keep warm in their drafty flat. Zola’s future wife, Alexandrine (Gloria Holden), shows up in the flat to tell him she found a job for him in a publishing house. But the job falls through when Zola refuses to stop writing muckraking books on the outside that get the ire of the government. The unemployed Zola befriends a prostitute named Nana (Erin O’Brien-Moore), who gives him her diary. Zola makes it into a best-selling novel and his money woes are over, as he tells in a frank manner her story about poverty, dealing with the slimy underworld and other social problems. Zola continues to be a thorn in the side of the government as he gets wealthy writing about those who are not privileged.

The film builds in a plodding way to tell about the aging, semi-retired Zola’s greatest deed, when he regains his youthful zeal to fight on the side of the oppressed by writing “I Accuse” for the framed French Jewish officer, Captain Alfred Dreyfus (Joseph Schildkraut), accused of treason for passing military secrets to the Germans. Though he first turned down the request of Dreyfus’s wife Lucie (Gale Sondergaard) to help, Zola changes his mind when he re-reads the evidence she left behind and recalls his old friend Cezanne’s warning for him never to become a fat cow. Dreyfus is an honorable officer who becomes a victim of French anti-Semitism and was unjustly imprisoned in the notorious Devil’s Island. Though the government discovers that they erred, they instead try to cover up their blunder. Zola loses public support and is tried for libel, and flees to England after convicted and giving a moving six-and-a-half minute courtroom speech to save the honor of the country he loves so much as a patriot. In England, Zola continues to fight for justice by writing articles. As a result of his relentless efforts, the Dreyfus case is reopened and Zola comes home to see the false accusers of Dreyfus exposed. But one night while writing, he accidentally inhales carbon monoxide gas from a faulty stove and dies before he learns that Dreyfus was reinstated with his full rank.

What’s truly amazing about this bland biopic, a clear story about institutionalized anti-Semitism–is that the word “Jew” is never mentioned during the entire film. 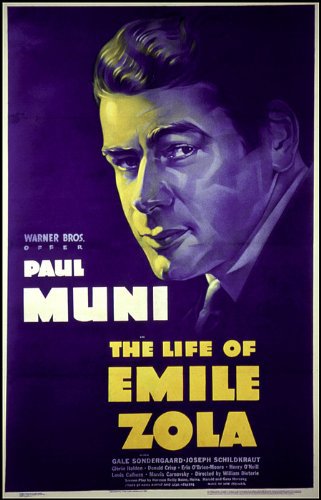