Macario was the first Mexican production to earn an Oscar nomination for Best Foreign Film. The fantasy fable, dependent on Mexican folklore, is directed by Roberto Gavaldón and is based on a story by B. Traven, the writer of The Treasure of the Sierra Madre. The stunning black and white shots are by the acclaimed cinematographer Gabriel Figueroa (“The Night of the Iguana”). Co-star Pina Pellicer was recruited by Marlon Brando, as a result of this film, to appear with him in One-Eyed Jacks (1961).

Set in colonial Mexico, impoverished woodcutter Macario (Ignacio López Tarso), a family man with five small children, has spent his whole life starving to death and is losing his will to live. The humble religious man is unable to provide enough food to feed his family, even as his wife (Pina Pellicer) works doing the laundry for the wealthy. On Macario’s rounds delivering firewood, which he carries on his back, he’s tempted by the turkeys in the oven of one of his clients–the village baker. Deciding that he wants a whole turkey for himself on this Day of the Dead celebration, he tells his loyal wife he’s going on a hunger strike until his whim is satisfied. She steals a turkey from one of her nasty rich clients, and prepares him a delicious turkey to take into the woods. On the way he magically meets the Devil, God and Death (Enrique Lucerio), and only offers to share his meal with the latter. As a reward for his generosity, the grim reaper offers him his most valuable gift–an elixir (a magical bottle of water) that can cure the terminally ill, but only if the grim reaper chooses them to be saved. This leads to Macario saving his youngest child who fell in a well and is dying, and then as word of this miracle travels through his village he gets the chance to save the lives of many wealthy people who pay him handsomely (though he’s fair and allows the poor to give him only what they could afford in goods). As a result he becomes wealthy, respected, never goes hungry again and lives in a big house. But envious locals report him to the Inquisition, who arrest him on charges of being a heretic and sorcerer. This leads to his ruination, as there’s no way he can defend himself against the powerful Catholic Church. His trial shows you can’t mess around with these faith-based power-hungry dudes when they get control of institutions (they self-righteously claim to have God on their side), as he’s given two test to see if he made a pact with the Devil–but, in reality, anything he does will result in dire consequences. Macario chooses to escape into the woods, and once again encounters the Devil, God and Death. This time Death tells him there’s no escape. The grim reaper takes Macario to a darkened cave lit by countless candles representing humanity, and each one extinguished represents a life snuffed out. This haunting shot stays with you and gives this cautionary fable its special moment of reaching pure cinema. 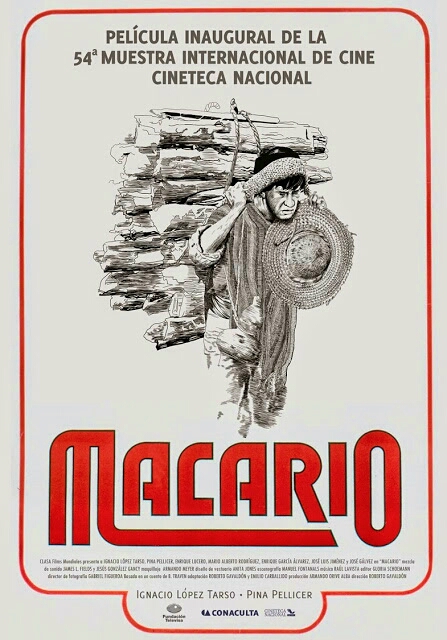