BEASTS OF THE SOUTHERN WILD

A wonderful debut feature directed by Benh Zeitlin, a New York animation filmmaker who relocated to Louisiana to make this survival in the bayou pic look authentic. Zeitlin co-writes it with Lucy Alibar, and it’s based on the stage play “Juicy and Delicious” by Ms. Alibar. It’s a nature film grounded on how the world is constantly changing and as ever is fraught with dangers.

It tells of a close-knit impoverished group of stubborn independent-minded black and white marginalized Louisiana residents dwelling in squalor in a forsaken lowland rural area of the Delta called “The Bathtub,” that’s cut-off from civilization by a giant levee. When there’s no storms the group gather together in their shacks at night to party, drink, play country fiddle music and set off fireworks. Feisty 6-year-old Hushpuppy (Quvenzhané Wallis) is the narrator, and it’s through her optimistic childish eyes that we see what’s happening. She tells us that her mom “swam away” after her birth and of living with her loving but volatile, angry and nutty dying dad named Wink (Dwight Henry, a baker from NO’s Third Ward) in a rundown junk-filled trailer mounted above ground with stilts. The self-sufficient Wink also has a boat made from the rear end of a rusty pickup truck set atop oil barrels. The imaginative girl resides in her dead mom’s house space, where she carries on a running conversation with mom’s ghost. Living is perilous whenever a storm hits, but there’s enough animals to eat as the group in The Bathtub that stayed home, refusing to evacuate to a shelter despite the mandatory order, survive and wait for the water line to recede. Wink is concerned with teaching Hushpuppy how to survive without him, as his death is looming. When this last storm makes it impossible to remain home, the group is forced to go to a shelter. The doctors at the site discover that Wink has a terminal illness and doesn’t have long to live.

The hearty girl survives mostly on her own and learns how to be fearless in the cruel world by conquering the beasts in her dreams, as dad is far from a tender mentor and when too drunk or sick to help any more because of his mysterious illness the little girl is basically left on her own. In a one-room school run by a tough love local healer, Hushpuppy learns about such things as prehistoric beasts called aurochs that considered humans as just meat and according to teach might be returning. The survival lessons from dad bring on dreams at night for Hushpuppy of large woolly bisons, like aurochs, running across her land and stampeding over whatever lies in their path. But the little girl proves to be a mystic and has a natural understanding of her place in the harmony of the world to confront the dream-like beasts. This mental toughness and sensitivity to suffering gives Hushpuppy the grit to survive such a harsh life.

The allegorical pic, showing the world is not a safe place, is indie film-making at a high level. The hand held cameras used by cinematographer Ben Richardson makes things edgy and the Wallis performance is stellar, as well as the natural performances from all the other non-actors. It’s not a perfect film, there’s too much clutter and wide-eyed naivety over the disaster, yet it’s a strikingly forceful pic that can catch you off-guard with its rich fantasy elements, its in-your-face racially tolerant humanism and how simply these backwater folks live in modern times so happily with nature like animals.

It won the Grand Jury Prize and Best Cinematography award at the 2012 Sundance Film Festival. 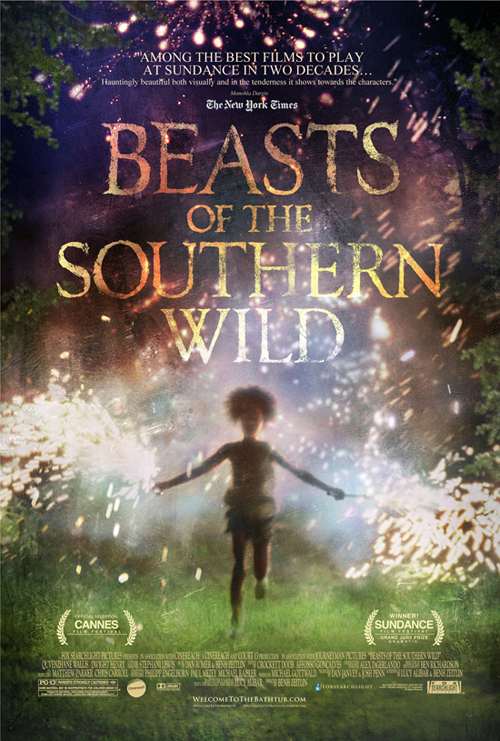