LIFE OF DAVID GALE, THE

The Life of David Gale is an unconvincing, dishonest and leaden political message drama that takes a stand against capital punishment, but does its cause more harm than good by coming up with such a silly story line and by a twisty ending that is more out of tune than a pig whistling Dixie. It is laboriously directed by the never too subtle Brit director Alan Parker (“Mississippi Burning“/”Angela’s Ashes“), whose idea of drawing a meaningful emotional response is to have Kate Winslet bawl her eyes out or for Kevin Spacey to pucker his lips in stoic defiance when he’s not into doing his scenery-chewing thing. The film had more nonsensical preaching in it than your usual do-gooder type of Hollywood tearjerker, and the screenplay by newcomer Charles Randolph stuck on a tacky dialogue and a murder mystery that was doomed from the start. Nothing could save this film from the executioner, not even the valiant efforts of such a notable cast. Spacey is just bloody awful in this martyr role, while Winslet is almost as bad in her self-righteous role as a crusading reporter.

This fictional tale is about Dr. David Gale (Spacey), an extremely gifted philosophy professor at the University of Texas and a distinguished author, who is also an activist for Deathwatch — an organization against the death penalty. Gale’s in a Texas prison on Death Row and has four days to live, as he was convicted of raping and killing his best friend and co-leader on Deathwatch, Constance (Laura Linney). Gale has never granted an interview before, but his pony-tailed lawyer Braxton Belyeu (Leon Rippy) contacts a popular news magazine that his client is willing to grant an interview for the next three days to only Bitsey Bloom (Winslet) with the condition that the ‘zine coughs up $500,000 for exclusivity. She has a reputation for protecting her sources no matter what, as she just got out of the slammer for not revealing her sources in a kiddie-porn article she wrote. The magazine editor assigns her an eager-beaver young intern, Zack (Gabriel Mann), to assist.

On the drive to the prison Bitsey and Zack are followed by a serious-looking cowboy in a pickup, and he’s soon seen following them everywhere. His identity isn’t determined until about halfway through, as he will then be identified as Dusty (Matt Craven) who’s known as a bullhorn for the Deathwatch group and a close friend of Constance’s. His presence serves as a shadowy figure somehow involved with the fate of Gale. When the film gets around to telling Gale’s involvement with the murder, all an innocent viewer could do is sit back and roll one’s eyes at how disingenuous this is all playing out. I’ve seen many third-rate exploitation B-movies that had a better conceived script and put up a wiser argument for its cause. This film was so outrageous that no matter what one’s previous stand over capital punishment, it’s easy for opponents to come together to agree that this one simply loses it as it turns ghoulish.

The sullen Gale tells his story in a three-day installment and it becomes increasingly evident that he’s innocent, as it all boils down to if the reporter can find the evidence to clear him in the nick of time to stop the execution. Gale believes he was framed by opponents of the death penalty, and at this belated date he finally awakens and is suddenly urging the reporter to help (the more the plot is revealed, the less sense it makes).

The flashback of Gale’s life starts with him in all his glory teaching his large college class about Lacan and after the lecture turning down a sexy student, Berlin (Rhona Mitra), who offers her body for a passing grade. After Gale learns that his errant wife (Gast) is filing for a divorce while living with her lover in Barcelona, Berlin thrusts herself at him during a social gathering and the drunken Gale succumbs to this temptation. She accuses him of rape and this causes him to be bounced from the university and blackballed from academia, even though she later dropped the charges.

There’s also a SNL type of satirical TV debate between the smug Gale and an arrogant Bush-like Texas gov defending the Texas death penalty system as it was in 1994. This scene is later used as the main part of the film’s plot.

The downfall of Gale continues, as he becomes even more of an alcoholic and is asked to leave Deathwatch because he’s no longer politically correct. His wife wins custody of his young son, and Gale hits rock bottom (that means he’s not only an alcoholic and a social pariah, but even worst–he works for Radio Shack). But Constance sticks by him. When Gale discovers Constance is dying of leukemia, he becomes devastated and the mystery story transpires from such a jumble of incidents.

Nothing good can come of such a muddled drama. Even though this one’s not a comedy, it can best be viewed as an unintentional one. What’s worse, it unwittingly fuels the opponents of the death penalty with reason to look upon their opposites with suspicion. Since the filmmaker’s attempt was to do otherwise, this becomes the final insult to this project’s dignity. 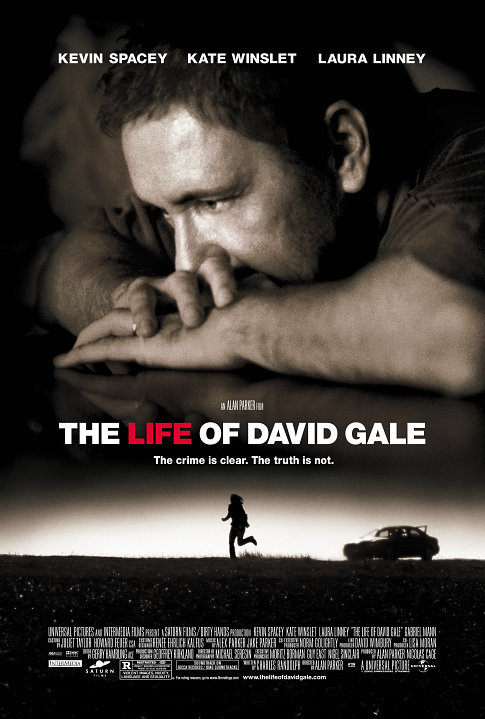