A strange supernatural drama about diverse passengers aboard a ship heading to an unknown destination. Unfortunately it shows its age when seen in the present. The pace is languid, the acting stilted and the dialogue is archaic. Film historians rave about its technical advances for its time, with splendid otherworldly photography and the excellent use of lighting to set an eerie foggy mood. It’s based on the hit 1924 Broadway play by Sutton-Vane, which the previous year opened in London.J. Grubb Alexander handles the screenplay and Robert Milton(“Devotion”/”The Luck of a Sailor”/”Bella Donna”) directs. It’s also known as the film that started Leslie Howard‘s splendid Hollywood career.

Young lovers Ann (Helen Chandler) and Henry (Douglas Fairbanks, Jr.) fail to commit suicide because their pet dog breaks a window preventing them from suffocating. They then find themselves as perhaps the only living passengers on a ghost ship, with no captain, going nowhere (the destination might be purgatory).

Thompson (Dudley Digges) is the Examiner, who plays god. He controls the fates of all the passengers that he sends to either Heaven or Hell.

Leslie Howard, gives the film’s best performance, as he assumes a different role from his stage role of Henry. Here he’s cast as an alcoholic who meets on the voyage his mother. He’s also the first passenger to discover the truth of the voyage’s purpose. Beryl Mercer was also in the stage version, and here plays a passenger concerned about her son.

A much superior version was remade in 1944, Between Two Worlds, and in 1961 another version, The Flight That Disappeared, which I haven’t seen. Serling’s Twilight Zone stories on TV have nothing on weirdness when compared to Outward Bound. 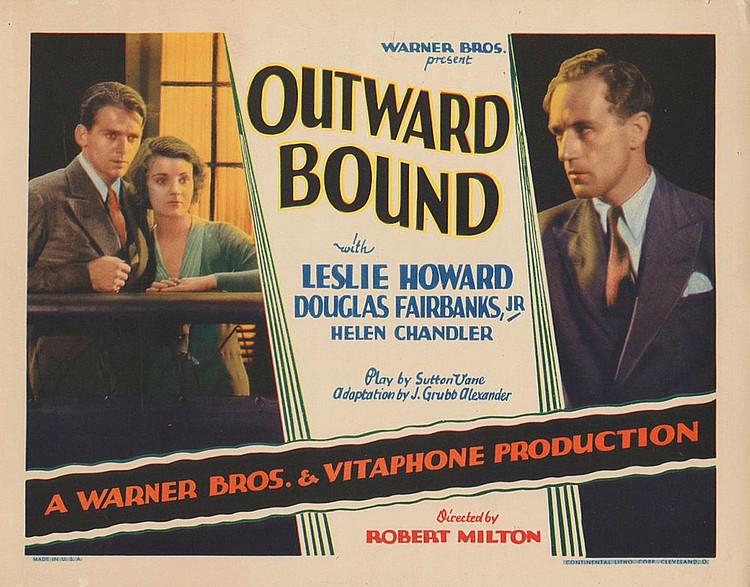