A modern day comedy taking place in Havana, Cuba, that is laced with supernatural implications. It is directed with artful flourishes by Fernando Perez. The film captures the whimsical mood of those who live in Havana by playing the staccato music of Bola de Nieve and Benny More.

The film suffers greatly in making every single thing that happens pertain to a heavy-handed metaphorical symbol. The hallucinatory story as a result is dumbed-down so much so, that it loses whatever strength and vision it might have had.

The three main characters are linked through the orphanage and one of them even has a mother named Cuba, that is, in case you don’t get that their stories are metaphors about the economic and political situation in Communist Cuba. These three Cubans internalize their personal struggles and strivings for happiness, as the film intersects their tales by cutting back and forth from one character to the next. The three will eventually meet on Saint Barbara’s Day, December 4, in the Revolutionary Square, to see what their fate brought them.

The film is playfully narrated by the 18-year-old Bebe (Bebe Perez) as if she was a teenage Guardian Angel to the three, who is seen in her narration in different locations and even underwater. Why she is the narrator is not clear, but she was an orphan with two of the other characters and learned to whistle before she could speak which upset her teachers.

The film opens with a quote from John Lennon: Life is what happens to you while you are busy doing other things. The film is heavy with quotes like that one, as if these cute little slogans can really explain life in Cuba.

The only one of the three stories that I found bearable, was the one about the slender and attractive Mariana (Claudia Rojas). She is a promiscuous ballerina who is so interested in getting the starring part in Giselle that she makes a vow of chastity with God, that if she gets the part she will never sleep with another man.

Mariana gets the part and her dance partner is a dream come true, Ismael (Joan Manuel Reyes). This leaves her in a tormented state, while he can’t understand why they don’t make love. She puts everything into the dance and becomes Giselle, but is frustrated that she can’t be with him.

Elpidio Valdes (Luis Alberto Garcia) is a scrappy young musician, scam artist, and fisherman, abandoned by his mother Cuba, who is wracked with guilt because he hasn’t lived up to her expectations of him. He even has a tattoo on his back shoulder telling of his love for his mother. Elpidio’s chance to change comes when he steals money from the bag of a tourist, Chrissy (Isabel Santos), a Greenpeace worker with a shaved head who came into Cuba on a hot-air balloon. He returns the bag with all her credit cards but without the money and the two carry on a hot affair, as he brings her fish every day to keep the romance going. When she is about to leave, she tells him she will be back in a month to see him or he can leave with her now to the United States. We know he has changed for sure, when he burns out his tattoo for his mother and tells Chrissy that he stole her money.

The most trite tale is of Julia (Coralia Veloz), a middle-aged do-gooder, the disconsolate social aid to the elderly, who is subject to fits of yawning and fainting spells set off by the word “sex.” Taken by her friend to consult a psychiatrist, she uncovers a traumatic love affair in her past which she has repressed for the last twenty years. The filmmaker gives Freud the importance of someone just being discovered and repeating his theories as if they were fresh instead of the cliches they have become to the Western world.

The film lost its focus and painted an artificially whimsical picture of Cuba, that was hardly relevant. Whatever pleasure there was came from its splendid ballet numbers, the beautiful artistic framing of its shots, and its bouncy music. But that was outweighed by its leaden symbolism. 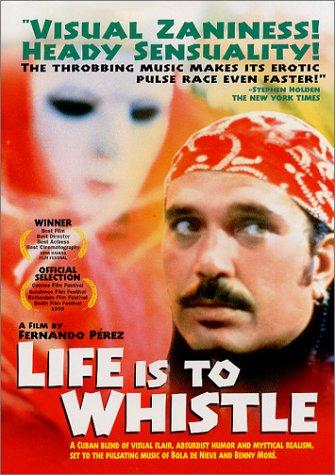