An exciting Cold War espionage thriller that’s well-acted and tautly directly by Henry Hathaway (“Johnny Apollo”/”The Dark Corner”/”The House on 92nd Street”). It’s based on the novel Sinister Errand by Peter Cheyney, and is written with some trepidation by the producer Casey Robinson. Lucien Ballard adds to the film’s pleasures with his beautiful black and white location photography.

The Department of State, on April 9, 1950, through the orders of the Secretary of State, assigns agent Mike Kells (Tyrone Power) to be a diplomatic courier and to meet fellow US agent Sam Carew (James Millican), assigned behind the Iron Curtain in Bucharest, on a train in Salzburg, Austria. Sam is carrying on him a top secret document, the Semper Project, which has information on the time and location when the Soviets will invade Yugoslavia. When Sam is murdered on the train and his body is thrown on the tracks, Mike can’t find the document on him but contacts Colonel Cagle (Stephen McNally), base commander of a nearby MP unit, and volunteers to go to Trieste on the colonel’s recommendation that he needs to go there to locate the mystery Soviet agent woman on the train, Janine (Hildegard Knef), who was seen talking with Carew in his sleeping compartment before he was murdered. The gung-ho diplomatic courier, Mike, tries to avenge the death of his close friend and retrieve the important document, and how he does so is artfully carried out even if it’s only done as just so much cinema fiction.

The plot has many twists and spies who turn out to be double-agents, and also a wealthy American widow, Joan Ross (Patricia Neal), who keeps turning up in different locales as the romantic interest to Mike. Helping Mike stay on his feet is the MP, Sgt. Ernie Guelvada (Karl Malden), assigned to be his guardian angel. Danger is always present, as Mike is leery that two Soviet agents (Charles Bronson and Mario Siletti) are keeping track of his movements and that wherever they are seen bad things happen.

It plays out as a fine example of an old-fashioned spy thriller, that slides by with a satisfactory plot despite its many holes that if pondered would make one think twice about the film’s worth. 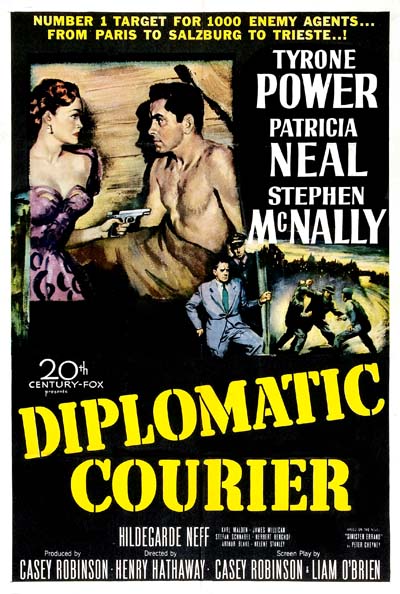