French New Wave cinema at its high tide. Chabrol’s second feature film weaves an enigmatic moral fable of good and evil. A conservative college student from the country, Charles (Gerard), stays with his playboy cousin, Paul (Brialy), while studying law in Paris. Paul seems to be a student of parties rather than a serious student, living as luxuriously as a student can in Paris.

We see this film through Charles’ naive eyes. But it is Paul who takes center stage, having a tremendous facility for socializing and meeting attractive girls while he shows little interest or respect for the academics. His reading is confined to detective stories or pornography. He does enjoy Wagner’s operas as he uses his knowledge of that music to impress the other students and to convey a certain sophistication about life that he does not really possess. He is especially adept in his ability to bluff people into thinking that he is a person of substance. He also exhibits… shall we say bad taste, as he frightens a Jewish student in his sleep by mimicking a Gestapo agent.

Yet it is Paul who achieves success with the things many young people seem to value: such as having many friends, many sexual conquests, a car, material things, and a very active social life despite his disdain for people. While his supposedly well-behaved cousin seems befuddled in this environment wanting to live a quality life but instead, living like a leper. He reads Balzac, respects women, wants to marry a nice girl, and is only too happy to please his mother by doing well in college. In other words, Chabrol makes him out to be a loser and a square, someone who has no inspiration for living. A rather pathetic creature, whose goodness is so conventional that it turns Chabrol’s stomach.

When Charles shows disdain to Paul’s older college buddy, the rakish Clovis (Cerval), he is basically reacting to his bourgeois way of looking at things. And when he falls in love at first-sight with Florence (Juliette), he shows no discernment, expecting everything to be just what he thinks it is; and, when his “nice” girl turns out to be a slut who leaves him for Paul — he is crushed.

Charles talks to the bookstore owner, an old man he feels a kinship with, as they both profess to being book lovers and are scornful of the flippant attitudes of the other students. The older man acts as a surrogate father for the student, who is desperately in need of counseling.

There is a great shot of Charles trying to enter a closed church after his break-up with Florence and in the next instant we see the camera pan to the open door of the bookstore, where he finds it easy to talk to the owner of the bookshop and get his girl trouble off his chest. But he is disappointed when the bookstore owner can only tell him that if his problem is only about a girl, that’s no big deal. He will get over it. This all seems to be like the logical thing to say, something we kind of expect a sympathetic parent to say to a hurt child. But for Paul, this is no little problem — it is an insurmountable problem. Chabrol has carefully painted a gloomy picture of Charles, indicating that there is no help in sight for those who need it whether from the pillars of society or from the rebels.

Warning: spoiler to follow. Skip the next paragraph if you don’t want to know how the film ends and proceed to the last paragraph.

The obedient Charles fails his college exams, while the badly behaved Paul passes the exam and throws a rousing farewell party to celebrate. This is too much for Charles to comprehend, and while Paul is sleeping he points a loaded pistol at his head but changes his mind. When Paul awakens from his drunken slumber he fools around with the pistol thinking it is unloaded as it always is, and when he fires he accidentally kills his cousin.

Chabrol’s film would be interesting enough just for its depiction of Parisian student life; but, when he moves into grounds of ethics and questions what love is to those who think they have fallen in love, his concepts become challenging intellectual engagements. The film questions the institutions and the people who have trust in them, and it also questions one’s own meaning of morality. This thriller becomes a matter of how one comes to terms with one’s ability, and how society is based on the principle of the survival of the fittest. It is Chabrol’s rather cynical but fair look at how Parisian society operates and how young people suffer from the pangs of youth, sometimes even in a deadly manner. 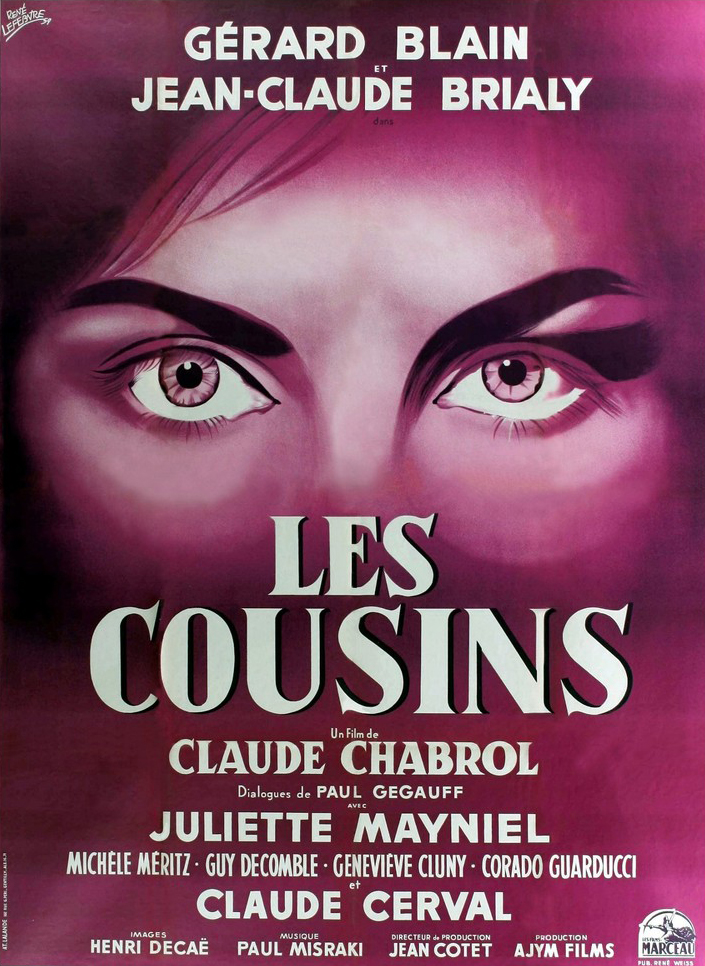