LEGONG: DANCE OF THE VIRGINS

French adventurer and international socialite, the Marquis Henry de la Falaise, directed and wrote the story about life on the South Seas paradise on the Isle of Bali that’s built around the traditional Balinese saying noted by the young maidens: “Should love enter thine eyes and go to they heart, beware. For should he whom thou choosest not return thy love, thy gods will frown and disgrace will befall thee.”

It was shot on location in 1933, which by that time had become a favorite international vacation spot for the rich and famous. The Marquis was one of Gloria Swanson’s ex-husbands and during the time of filming was married to Constance Bennett.

If nothing else but a pleasant adventure story the dilettante filmmaker does a fine job catching the tropical beauty and exotic flavor of the island, where the women were mostly topless, life was carefree and the weather was always balmy (no rainy season was shown). The film uses a melodramatic story to highlight the impressive Balinese customs such as their dance and religious rituals. For ethnographic study alone it’s invaluable to catch the natives relaxing, playing games, going to market but never at work–which I assume is mostly fishing and farming. With the tourist craze in full blast during the 1930s the old ways soon vanished, so this film might be one of the last chances to catch such colorful local ceremonies.

The tale centers around a simple traditional family consisting of a man named Bagus Mara Goesti whose joy in life is to raise fighting cocks. He has two lovely daughters Poutou and the younger Saplak, who both are virgin temple dancers performing the sacred Legong dance. Poutou falls in love with a cocky young gamelan player (drummer) from North Bali and her father invites him to the house to dine with his daughter. But on his way to the house, Nyong meets Saplak by a spring and falls in love with her. As is custom, Poutou must go through with her final Legong temple dance but already realizes she will be rejected by the one she chose for her husband. This means disgrace for Poutou, as the gods frown on this as do the village gossips. When seeing Saplak running away with Nyong after the dance ceremony, the sweet Poutou commits suicide by jumping off a bamboo bridge. The film closes as the saddened father officiates at the cremation ceremony for his favorite daughter.

The Club Foot Orchestra, known in the San Francisco and Los Angeles area for accompanying silent films, works with the authentic native sounds of the Gamelan Sekar Jaya orchestra to produce a beautifully combined evocative score largely consisting of the American strings and clarinet and the Bali drums, cymbals and xylophones.

The silent film was shot in a lush two-strip Technicolor. Long ignored because the censors upon its release didn’t care for its nudity, it has recently been restored by the UCLA Film & Television Archive and might be considered a minor classic compared to the major classic status of F.W. Murnau’s tropical film called Tabu. 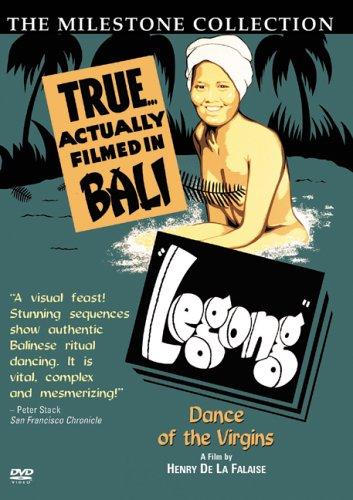