“A film geared for those who can’t get enough of geek angst, PC’s, and cappuccino into their system…”

A casual, inane, throwaway film, directed by Peter Howitt, of “Sliding Door” infamy. It’s about a geek getting a dream job that turns out to be a nightmare. A film geared for those who can’t get enough of geek angst, PC’s, and cappuccino into their system, and therefore need unrealistic thrillers about geek lifestyles to inspire them with more highs from cyberspace. Others can relish in the film’s anti-Microsoft feelings.

“Antitrust” plays on the Bill Gates persona ad nauseam and has Tim Robbins as Gary Winston, the antihero, billionaire geek and the silky-smooth head of the shady NURV, based in Portland, which is the biggest software company in the world. Gary takes that Gates persona on and runs with it into murderous territory, where even Gates’ harshest critics haven’t gone in their description of him. The company is criticized for putting out inferior products, stealing other people’s genius, not making Internet information free to the public, and of stopping the geeks in the garage from getting their product to market. The Justice Department is investigating NURV and is gathering evidence to file an antitrust suit against them for preventing competition.

On an infomercial video given to NURV employees, Gary states his deep philosophy in a nutshell: “This business is binary. You’re a one or a zero. Alive or dead.” The geeks in the garage also have a motto: knowledge-belongs-to-the-world.

The hero of the film is idealistic computer programer, Stanford grad Milo Hoffman (Ryan Phillippe), partners with another genius geek, Teddy (Yee Jee Tso). About to be funded by venture capitalists they are ready to form their own Internet start-up company with their friends. They work out of their garage, using their tech breakthrough in the field of open source codes. Gary recruits them, as he follows geek geniuses all over the world to try and get them to keep his empire always moving forward. He is involved with a costly Synapse project (it’s a satellite system that will link every existing communication device into one network) and needs to meet a deadline on its global-communications breakthrough, needing their particular skills for him to finish on time. Through his snakelike charm, which hides his evil intentions, he lures Milo to work for him. Milo’s partner chooses not to work for the capitalist pigs but Alice (Forlani), Milo’s attractive live-in squeeze, encourages him to jump at the opportunity.

A tour of NURV’s ultra-modern geek headquarters, which is a campus with multi-buildings and satellites on it, fills us in on the atmosphere around such high-tech complexes. In the security tight building Milo is assigned, it is filled with computers and geek employees worshiping at the feet of Master Gary. But to Milo’s great satisfaction Gary singles him out for special treatment, anxious to have him find a way to interface his system with NURV satellites before the critical deadline.Milo quickly forgets his ideals and loses contact with the still idealistic Teddy, as he settles into the NURV family and immensely enjoys his new lucrative job.

Milo gets help from Gary every time he seems stumped in his quest as he is provided with new information from an unidentified source. Gary gets irritated with him when he asks the name of the genius source. However his suspicions really get aroused when Ted, who was on the verge of a breakthrough on the same techie thing he was after, is found battered to death in what is labeled a hate crime; and, Gary gives him the data Teddy was working on. Wheels start spinning in his cranium and the film moves in the direction of a murder mystery.

Not trusting the FBI, after one of their agents (Richard Roundtree) offered him $42,000 and a Buick to spy on NURV, he decides to tell his co-worker genius, an elusively troubled but attractive girl named Lisa (Rachael Leigh Cook), that he suspects Gary of masterminding the killing off of his competition to get code and enlists her help in trapping Gary.

“Antitrust” goes under the moment it turns the corner and becomes a paranoid action thriller only, as it mixes together a plot about the villain using both high-tech and old-fashioned methods to secure his ignoble aims. Gary uses high-tech fiber-optic video surveillance to spy on all his workers and his competitors, and he uses low tech methods to get people to betray others for him. He also gets goons to hit his competition over the head with a baseball bat in order to maintain his status in the computer world as numero uno.

The hero uses his computer skills to hit all the right keys, as he gathers incriminating evidence to bring down the powerful villain and his evil empire. The film enters the world of make-believe and has the same empty feeling to it as a Bond film. In the end, the hero screams out his youthful motto: “human knowledge wants to be free.” Our hero, after a selfish start proves that he is truly selfless, much like the heroes in the past who save the world from despots despite personal dangers and then ride off into the sunset as if they were the Lone Ranger.

Speak about perfect casting, then you must speak about Tim Robbins. He’s really fun to watch in his understated performance as the sociopath billionaire, a clone of Bill Gates. He even looks like Gates. It was fun to watch him munch on his Pringle potato chips as he acts the part of a geek to pretend having a chumminess with Milo. Ryan Phillippe is energetic and believable as the curly-haired nerd who can’t say no to capitalism, even if he can’t say yes to it. The film is modestly entertaining. It is certainly diverting. It is also senseless and unimportant. It’s a Hollywood film, a nostalgia film about the heyday of Internet startups in the 1990s and of the powerful global influence of the Microsoft empire it emulates; and, of the many geeks it drew into its sticky web of greed and through stock-options made some millionaires and some billionaires. A film for those who are into ‘virtual unreality.’ There is no message in this improbable tale that isn’t garbled. The filmmaker had a chance to say something, but prefers to play it safe and come up with a possible blockbuster out of a film rife with mindless action sequences. I could see an audience for this film consisting of cyberspace junkies willing to see anything about computers. It is an absurd film that was one mouse click away from crashing. 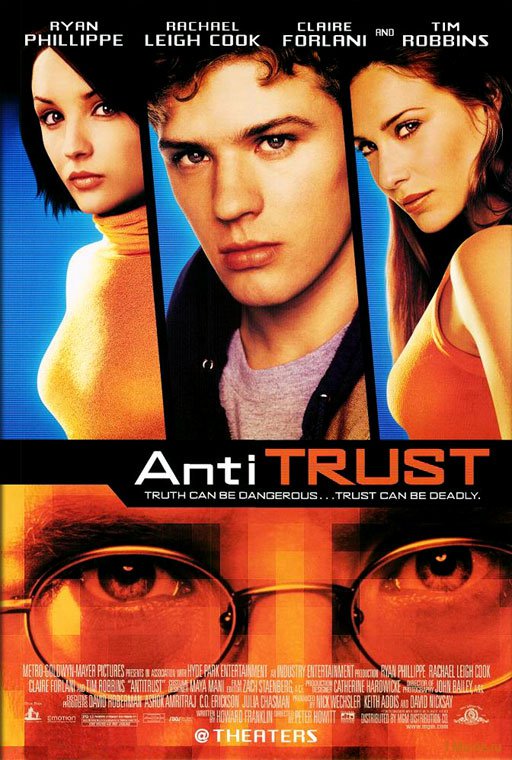