A Brit crime thriller that resembles, as one would expect, “Lock, Stock And Two Smoking Barrels” and Snatch, films director Matthew Vaughn previously produced. Vaughn took over directing honors for Layer Cake when Guy Ritchie, director of those two films named above, bowed out. Layer Cake fills the same stylish but vacuous filming techniques of the previous films, as it stumbles over a convoluted plotline, just too many multiple betrayals to keep track of, a host of colorful mobsters whose catchy names leave more of an impression than their personalities, plenty of bloody rubouts, and nobody to care about among the various baddies featured. No matter how energetic the cast was and how much the action was revved up, I just couldn’t find a way of caring about anything that was happening. If you seen one of these three flicks, then you really don’t have to see the other two to know how the deal works–the same brain dead type of story and commercially successful formula is kept intact. J.J. Connolly adapted the crime story from his novel.

Layer Cake is a metaphor for the hierarchy of criminals who comprise the Brit underground scene and, furthermore, points out how complicated it is to make one’s way through these layers to get to the top.

The tale is narrated by the nameless, referred to as XXXX, bright yuppie-like, mid-management, inconspicuous drug-dealer (Daniel Craig), a go-between who buys cocaine from wholesalers and sells it to street pushers. Craig wishes to make one last deal and retire with his large nest egg from this dirty business. There’s no awakening in the gangster that he’s a crud and morally corrupt, he only feels rotten that his underworld superior Jimmy Price (Kenneth Cranham) unfairly orders him to locate the daughter of top crime boss Eddie Temple (Michael Gambon)–a junkie on the loose with a black doper named Kinky. Secondly he’s to purchase a million Ecstasy pills snatched by a low-level mobster, known as the Duke, from a vicious gang of Serbians–headed by the vengeful Dragan. The unstable psycho, Duke, is reaching far above his order in the layer cake. The Narrator is helped by loyal muscle men Morty and Gene (Colm Meaney), who are depicted as the old-time gangsters who know how to rub out their enemies the old-fashioned gangstyle way. There’s a brief romance for the Narrator with the flimsily dressed blonde named Tammy (Sienna Miller), but their unassuming relationship leaves no time for sex or getting to know each other as the Narrator is always working his tail off to stay ahead of the dangerous game he’s playing.

By the time the last morsel of Layer Cake is digested and all the nasty business is taken care of in the expected entertainingly bloody fashion, you realize how pointless and tasteless it all was and how it had nothing to say.

The rumor mill has it that the handsome and charismatic Craig, just a shade under forty, is being considered as a front-runner to replace Pierce Brosnan as the next James Bond. With a better script, he should be just fine. 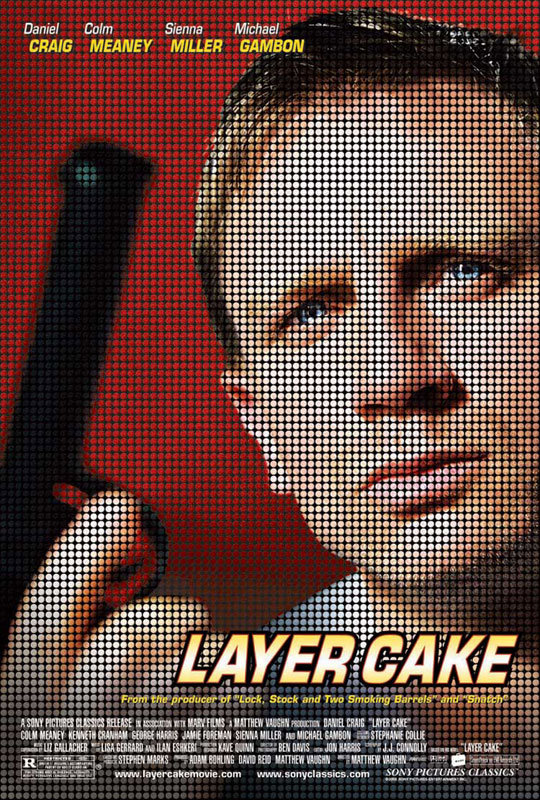