“A marvelously compelling documentary, even if it seems rigged when it isn’t.”

A marvelously compelling documentary, even if it seems rigged when it isn’t, as everything fits so smoothly together due to the efficiency of the filmmakers. The boxing and real-life experiences are equally covered in a spellbinding fashion as the N.Y.U. film graduates, Nanette Burstein and Brett Morgen, went to the rough Bedford-Stuyvesant section of Brooklyn and had their cameras track the amateur boxing lives of Noel Santiago, Tyrene Manson, and George Walton. They followed them during the 1997 Golden Gloves Tournament in Madison Square Garden. The star of the film is the heavyset, steadfast 41-year-old trainer Harry Keitt who grew up in the neighborhood, stumbled in his youth in the drug-infested projects, served time for murdering his cousin, was homeless for a few years before he straightened his life out and is now the perfect role model for these equally troubled youngsters he dispenses sound boxing and teaching advice to. He has been at it for the last 16 years, as he waits for his big break to become a noted trainer through one of these kids. It is the same storefront gym that produced Riddick Bowe and where Mike Tyson worked out, so success has already touched some who climbed out of this slum.

This is a documentary about dreams and hopes for the three young boxers, and for Harry who lives vicariously through them. Noel is a 17-year-old high school student with truancy and attention-deficit (ADD) problems. He is the least talented boxer of the three who has been boxing for only the last two years, which he says helped straighten out his life. He curtailed his smoking of weed, hanging out with street kids, and stopped some of his activities as a robber. Tyrene lives with her crack-addicted uncle who has AIDS and is guardian to his kids, receiving welfare for them. She has stopped using drugs and needs boxing because it brings out the rough side in her. Her ambition is to win the belt. She is also a church-goer, recently giving up street life for God. George is 25-years-old and is the most talented of the three and is being pursued by a big-time professional manager. He looks like Mike Tyson and has an easy smile which shows off his gold teeth.

The lanky Noel gives it his best shot, but just doesn’t have the skills to advance in the Golden Gloves. He will redirect his life by going to night school and getting his GED, afterwards hoping for a career in the Army. Tyrene runs into some hardluck and her story is really the pivotal one in the film. The police raid her house which she shares with four others, and find in her bedroom a packet of crack. She faces a minimum of 4 1/2 years to a maximum of 25 years for possession and intent to sell a controlled substance on what seems like a bogus charge, since she claims it is not hers and the circumstances of her house would clearly indicate that the crack belongs to the crack-addicted uncle. Her trial date coincides with the Golden Gloves, and she therefore can’t box in the most important event in her life. She will be found guilty in a trial that seemed to be a mockery of justice, and is given the minimum sentence. When she gets released after doing more than two years, the now 30-year-old woman returns to her church activities and continues to pursue her dream of being a professional fighter. George gets dazzled by the sleazy manager (Marcello), who hooks him up with a well-known ex-fighter as his trainer — Eddie Mustafa Muhammad. George reluctantly dumps Harry, even though Harry has treated him as if he were his son. He soon finds that he is being cheated by his new manager and returns to the small time but honest Harry. Harry, in the meantime, continues to open up the gym and train potential champs, hoping that one day such a champion will hook up with him. He continues to help these kids in the best way he could, offering them encouragement and taking the bitterness out of their defeats with practical platitudes. He tries to steer them away from the mistakes he made in his life and responds to the kids in a sincere way.

Life is tough in Bed-Stuy and no matter what some supposedly well-meaning liberals say about the violent nature of the sport — for some, it is a way out of their predicament. It takes courage to go in the ring and try to prove yourself; it also takes some kind of instinctual intelligence to be a successful fighter, and that might be the best skill these three aspiring boxers have going for them. Boxing might be their best chance of succeeding in life and I see no reason why they shouldn’t be given that opportunity. When the documentary focused on their life outside of boxing the point clearly driven home, was how few opportunities there were for them in the streets since they are limited by their lack of education and ambition. As one of them said, “Selling drugs and doing crime seems like the only other options out there.”

This was a wonderfully intense documentary. The full impact of what I saw only hit home with a wallop when I thought about the film afterwards. The story of Tyrene’s unfair drug bust and her righteous anger at the trial, makes this film more than a boxing story. There is enough shame in the actions done by the court system to be passed around to everyone: her court-appointed lawyer didn’t come to fight all the way for her; the horrid judge seemed bored with hearing the truth and decided to strike from the record what she said in her behalf; and, the prim, white woman D.A., who had to know she wasn’t serving justice by prosecuting this case, nevertheless, does so for supposedly her own political gain. It left a haunting feeling in me about the courts and the Draconian drug laws. The crushed look on the face of Tyrene upon hearing her sentence is hard to forget, it’s a glazed and tearful look that served as a metaphor for what society is doing to those who might be mixed-up but are innocent in their hearts. The filmmakers were unobtrusive and totally professional, as technically it doesn’t get much better than this for a documentary. The filmmakers were also fortunate in their choice of the three boxers and trainer they keyed in on. They all had a gripping story to tell in their search for dignity, and their humanity flashed across the screen with the speed and gracefulness of a jab thrown by Muhammed Ali. 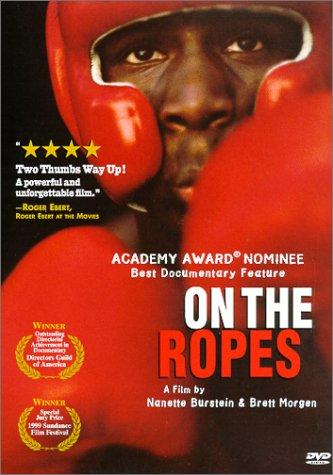