“There’s nothing much that distinguishes this wannabe arty film from other mainstream hillbilly bootlegger movies.”

Mixes together gore, hogwash and moonshine that goes down as a mostly unpleasant thriller about Prohibition-era bootleggers and the dark pursuit of the American Dream. There’s nothing new here nor does Australian director John Hillcoat (“The Proposition”/”The Road”/”Ghosts…of the Civil Dead”) do anything special but keep the film beautiful looking through the nature photography of cinematographer Benoît Delhomme. It’s written by Nick Cave and is based on the book “The Wettest County in the World” by Matt Bondurant. Because its story line is so familiar, the characters are stereotypes and in the end it shows it’s only about getting the villain and surviving the lawmen to be redeemed to live out the American Dream, the thriller never becomes memorable and as entertainment just sparkles over such gratuitous violent incidents as a slit throat, a beating with brass knuckles, a moonshiner being viciously clubbed with a rifle butt, a non-graphic rape, a revenge castration, a tommy-gun assassination (courtesy of Gary Oldman in a cameo as a Chicago gangster who is not all bad) and a few 1930s-styled country shoot-outs. There’s nothing much that distinguishes this wannabe arty film from other mainstream hillbilly bootlegger movies. In this pic all the moonshiners are the good guys and all the cops are the bad guys. It’s that kind of simplistic pic, though it pretends to be more complex.

Set in 1931, in the rural hills of Franklin County, Virginia, the Bondurant family makes its living as moonshiners. The leader is the laconic Forrest (Tom Hardy), a strapping guy who believes he’s indestructible and is not adverse to occasional bouts of violence. The middle brother is the hot-headed strongman Howard (Jason Clarke), while the young runt Jack (Shia LaBeouf) is the driver who wants to prove to his tougher brothers that he’s not soft and could take on more responsibilities in the family run crime business. The local sheriff’s department have an easy going relationship with all the moonshiners in the county, but that changes when the sadistic hissable foppish federal agent from Chicago, Charley Rakes (Guy Pearce), takes over control of enforcing the Prohibition laws and shakes down the moonshiners. The Forrest boys refuse to give him bribery money and things take a violent turn as Rakes goes over-the-top violent on them and the cracker family retaliates with their brand of violence.

There’s a dull romance worked into the film between the rebellious daughter (Mia Wasikowska) of a stern Mennonite pastor (Alex Van), who can’t resist the aggressive Jack’s flirtations. During the course of the movie Forrest gets humanized when finding a love interest in the heart-of-gold saloon dancer from Chicago, Maggie (Jessica Chastain), who fled the Windy City gangsters to find peace working as a clerk in Forrest’s general store. Also in a supporting role is the film’s most likable character, the non-violent inventive young brew-master for Forrest’s still, Cricket (Dane DeHaan).

The pic follows the brothers in their up and down business trials with the psychopathic Rakes, who obsesses to shut them down when they refuse paying him off to exist like the other moonshiners. When the brothers openly go after the one-dimensional cartoon-like villain the pic comes to a boil and the action, with its bloodletting, even though of the cliché kind, removes the story’s dullness and lack of drama. If Guy Pearce was not around to get under our skin, the moonshine brother heroes would have probably bored us to death with their artificial piety.

The film is based on a true story, with the brothers depicted being the forebears of the author of “The Wettest County.”No wonder the brothers are made to look so good! 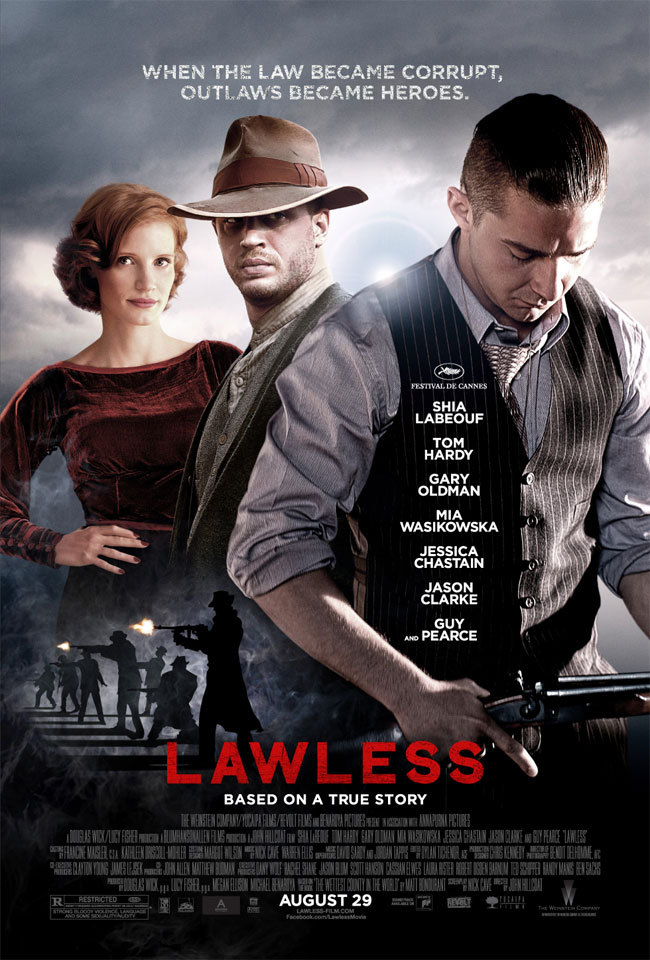