Herbert Brenon (“The Great Gatsby”/”The Breaking Point “/”The Flying Squad “), known as a despotic director, directs this old warhorse of a stage play. It’s a bittersweet romantic melodrama, a film with a similar theme that Lon Chaney did with Norma Shearer in 1924’s He Who Gets Slapped. The fifteen-year-old Loretta Young (only 14 at the time of shooting) is 45-year-old Lon Chaney’s leading lady. Loretta started in showbiz at the age of four as an extra, but this was her first major role. The film proved to be popular; MGM had it shot with an alternative happy ending to its sad ending and let the individual movie houses decide which version they wanted. No surviving copy of the happy ending seems to have survived. It’s taken from a 1923 play by David Belasco and Tom Cushing based on the Italian play Ridi Pagliacci by Gausto Martino, Elizabeth Meehan is the screenwriter. The play had a successful run in New York with Lionel Barrymore in the Chaney role. It was shot on location in Elysian Park, a suburb of Los Angeles by the legendary cinematographer James Wong Howe.

It opens on a beautiful spring day in the Italian countryside where itinerant clowns, Tito (Lon Chaney) and Simon (Bernard Siegel), who travel from town to town entertaining the Italian peasants in their two-man act stop to relax in the country. This leads to Tito’s rescue of an abandoned child he finds by the riverside and names her Simonetta (Loretta Young) after Simon in order to soften his reluctant partner up about adopting the child. Tito raises her and we soon see she grows up to be a beautiful and sweet young lady, someone he falls in love with. But she has met a cocky young Count Luigi Ravelli (Nils Asther) and has fallen in love with him. Not wanting to hurt the kindly aging clown’s feelings, she doesn’t damper his hopes as she tells him she returns his feelings. But Tito discovers the truth and while working on his familiar act on a tight-wire falls to his death, making it look like an accident, which allows her to marry Luigi.

The story itself was not much, but Chaney makes it a moving experience and breathes life into this dinosaur by playing with great feeling the happy man in public as the clown but in private life the tragic figure missing someone to love. It was a powerful performance by the man known as “the man of a thousand faces,” who took pride in playing handicapped characters. Chaney was the child of deaf-mutes; he developed his tremendous gift for pantomime in order to communicate with his parents. 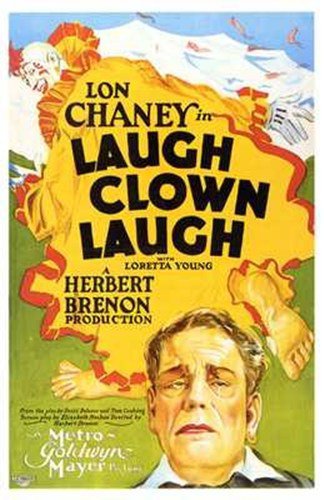