LAST TRAIN FROM MADRID, THE

James Hogan directs this war drama from a story by Elsie Fox & Paul Harvey Fox. The Spanish Civil War is filmed in a most disconcerting fashion as a backdrop to a bunch of soap opera stories, resulting in a cliche-ridden film and a tawdry storyline that reads like a train wreck. Newsreel shots of plane bombings inserted to give the tale some authenticity make things worse instead of better. It centers on a group of refugees preparing to board a train that will take them to safety from the fighting in war-torn Madrid, where the Loyalist are in control of the bloody city. Atwill is the patriotic Loyalist colonel in charge of this operation. Some of the refugees featured are a political fugitive (Bowman), the daughter of the fugitive (Bradna), a hooker from Valencia (Mack), a baroness (Karen Morley), a soldier who disobeyed orders at a firing squad by refusing to shoot (Cummings), a world-weary American newspaper reporter (Ayres) and an orphan. The harried passengers lives depend on getting aboard, as there are only a limited amount of permits. Once we see who makes it safely on board the train, the film through flashbacks presents vignettes from their lives. The themes of love, self-sacrifice and duty are sorted out from the passengers’ lives.

A love triangle is the featured story. Roland and Quinn are fellow army officers and longtime friends who are now on opposite sides, and the beautiful Lamour is the one they both love. Roland and Quinn acquit themselves well considering the poor script they had to work with, while Lamour proves she can’t act and tries to get by on looks alone. Roland is trying to escape on the train even though he is without a pass and Lamour says she will marry him, as Quinn pays the ultimate price of choosing friendship over patriotism.

I must say it was one of the worst films of that decade. There were so many intertwining stories going on that confusion soon sets in, and to make matters worse none of the tales were really interesting. 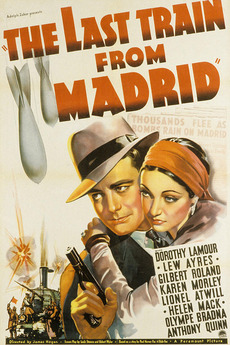